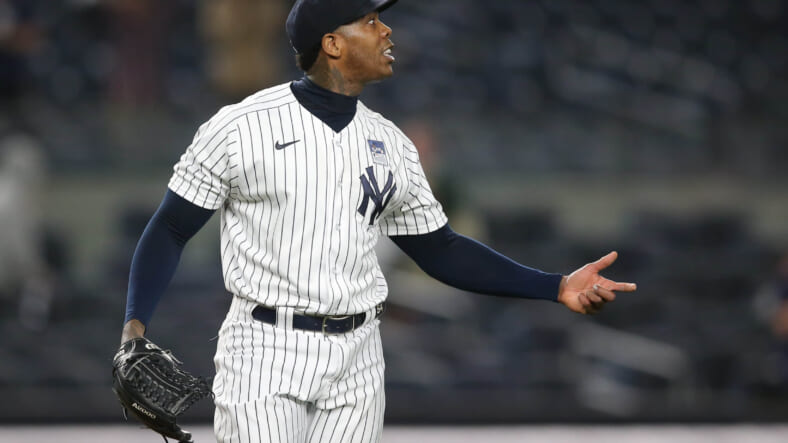 The New York Yankees have an interesting story developing with closer Aroldis Chapman, who was a fringe playoff roster candidate before completely quitting on the team this weekend.

Chapman was expected to throw a live batting practice session and skipped it, returning home to Miami, according to Aaron Boone.

The Yankees were likely going to leave Aroldis Chapman off the playoff roster:

Clearly, the Yankees were concerned with Chapman and his value during the playoffs, especially after ending the 2022 regular season by giving up two earned runs across two appearances in October.

Chapman has been awful this season, arguably his worst as a professional. The 34-year-old is in the final year of a three-year, $48 million deal, hosting a 4.46 ERA, seeing a massive drop-off with 10.65 strikeouts per nine and a 73.8% left on-base rate.

Boone also stated that the Yankees were exploring disciplinary action and leaving Chapman off the postseason roster due to his egregious actions.

Given his performance this year, there was a strong possibility the Bombers were going to factor him out regardless, which likely sparked his outrage.

Chapman recently missed several weeks of play due to an infection on his leg stemming from a midseason tattoo. That likely rubbed the team the wrong way to begin with, so his latest actions will undoubtedly put him in the doghouse ahead of Tuesday’s matchup against the Cleveland Guardians.