Yankees are utilizing the versatility of Clarke Schmidt 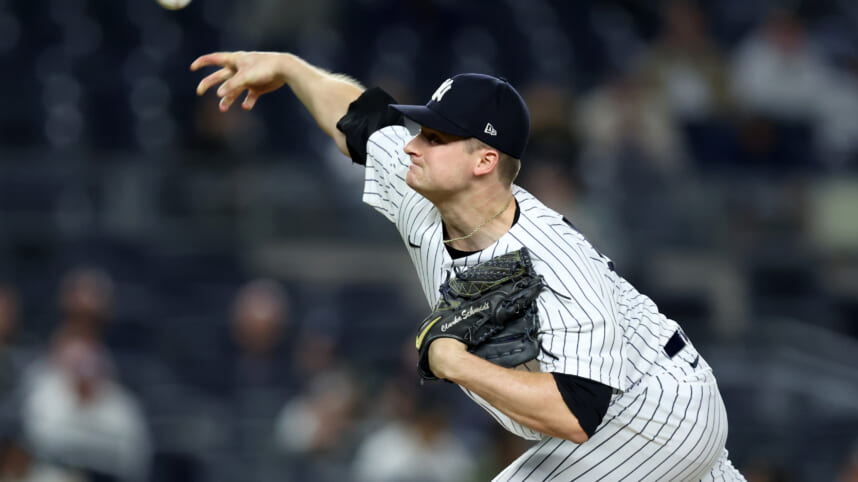 The New York Yankees have had to get creative with their starting rotation with Luis Severino and Nestor Cortes both on the injured list. The emergence of Domingo German has been fantastic the past few weeks, but losing Cortes also left a vacant spot that needed to be filled.

There’s reason to believe that Cortes’s injury is a “phantom” situation, with the Yankees trying to limit his innings before the post-season and avoid any injuries down the stretch.

Luckily for the Yankees, 26 year old pitcher Clarke Schmidt is showcasing his versatility preparing to start against the Oakland Athletics on Saturday afternoon.

Schmidt has primarily been utilized out of the bullpen this year, making 17 appearances with the top team and eight appearances in Triple-A. Over 33 innings with the Yankees, he features of 2.18 ERA, 4.60 xFIP, 7.91 strikeouts per nine, an 81.6% left on base rate and 42% ground ball rate.

Schmitd’s numbers are solid, showcasing a big step in his development this year after posting a 5.68 ERA in 2021 over 6.1 innings. He’s been working diligently to improve his sequence and pitch efficiency. He’s utilizing his slider far more often this season at 33.5%. His slider is generating a .135 batting average against with a 44% whiff rate and 24.6% put-away rate. His sinker and 4-seam fastball have been a bit inefficient, producing a .280 and .310 BA respectively.

However, the longevity of his arm gives the Yankees a bit more flexibility, utilizing him as a relief arm and starter.

Cortes is projected to return in a few weeks from the injured list, suffering a groin injury. Schmidt will likely fall back into a bullpen role when he returns, but he will likely make a few spots starts in the meantime to mitigate fatigue.