Yankees are scouting 2 Oakland Athletics pitchers at the deadline 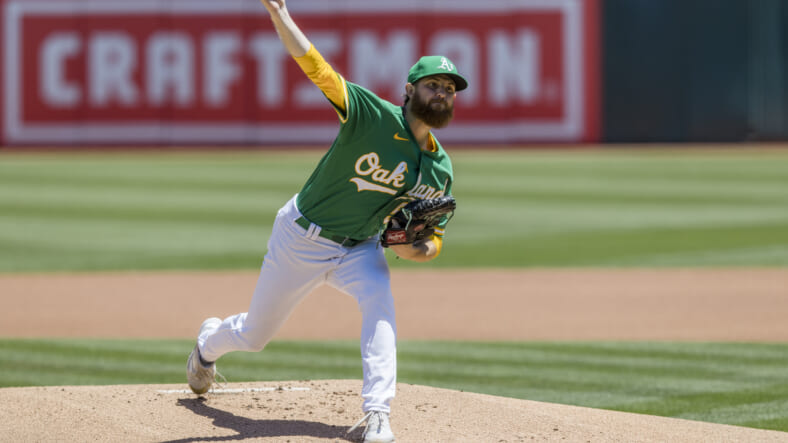 The New York Yankees only have a few more days before the trade deadline expires. With needs in the starting rotation and a bullpen arm, general manager Brian Cashman needs to ramp up his efforts and acquire a few players who can make a positive impact the rest of the way for the Yankees.

Currently, the Yankees are waiting for starting pitcher Luis Severino to return from a shoulder injury. Severino is expected to start throwing again on Monday, which should begin his rehabilitation process. However, the Yankees’ rotation has taken a significant hit due to fatigue. Jameson Taillon, Severino, and Nestor Cortes are battling inning caps given past injuries and just lack of usage.

With that in mind, the Yankees are sending scouts to look at several Oakland Athletics starters.

Yankees are scouting two Oakland pitchers ahead of the deadline, per Kristie Ackert of the NY Daily News:

Obviously, the top option from Oakland is Frankie Montas after the Yankees lost out on the Luis Castillo sweepstakes. Montas hosts a 3.18 ERA over 104.2 innings this year. He’s earned 9.37 strikeouts per nine, a 73.6% left on base rate, and 46.1% ground ball rate. His 12.6% HR/FB ratio is a bit high, especially with the short right porch in Yankee Stadium.

However, Montas also features a 3.22 xFIP and 3.42 SIERA, two solid numbers that indicate his qualities. Montas relies on a 4-seam fastball, split-finger fastball, sinker, slider, and cutter. His best pitch is a split-finger fastball, generating a .180 batting average against with a 33% WHIFF rate and 21% put-away rate. His sinker has been a bit off this year, throwing it 22% of the time, getting a bit more efficiency out of his 4-seam fastball. Batters are hitting .255 with a 28.4% WHIFF rate and 23% put-away right against his 4-seam.

With Castillo completely blowing up the starting pitching market, the Athletics are likely going to want a haul in return for Montas, which makes the likelihood of the Yankees acquiring him lower.

One potential alternative is Paul Blackburn, who’s pitched 106.1 innings this year for Oakland at 28 years old. Blackburn will be a free agent in 2026, but he has several years left of team control. This year, he hosts a 4.15 ERA.

Blackburn is a heavy ground ball pitcher utilizing a sinker, cutter, curveball, change-up, 4-seam fastball, and slider. The Yankees may like Blackburn because of his sinker, which Matt Blake could extrapolate on. Blackburn isn’t a high-velocity thrower, averaging out at just 91.7 mph on his FB.

In fact, he’s very similar to Jamison Taillon, generating ground balls and weak contact instead of increased strikeout numbers. This is the first time in his career Blackburn has pitched over 100 innings, so he could face fatigue issues down the stretch and doesn’t have any postseason experience to offer.