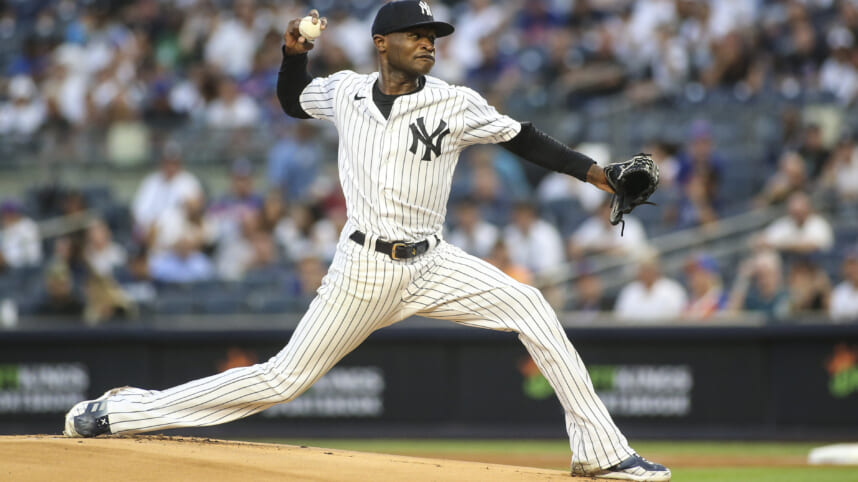 Having missed the first half of the 2022 season, New York Yankees starting pitcher Domingo German has made a positive impact since re-joining the team on July 21 against the Houston Astros. In his first two games, he gave up seven earned runs over 7.2 innings, hosting an 8.22 ERA, but he’s changed course entirely in the month of August, providing sublime production.

Last season for the Yankees, German posted a 4.58 ERA over 98.1 innings. He recorded 8.97 strikeouts per nine, a 70.1% left on base rate, and 42. 2% ground ball rate. His numbers are much better this season but has seen interesting decreases in the strikeout department and ground ball category. He’s also giving up fewer homers at 1.30 per nine and a 10.6% HR/FB ratio. Those are the lowest numbers in his career.

In the month of August, German has been phenomenal, giving up eight earned runs over 27 innings, including just two homers and six walks in that timeframe. He’s recording a 2.67 ERA, collecting two wins, one against the Seattle Mariners and another against the Mets in a pitching duel with Max Scherzer on Monday night. Considering he limited a potent Mets team to just two runs, the Yankees must be incredibly excited about his offerings down the stretch.

How the Yankees can get the most out of German:

If manager Aaron Boone isn’t keen on utilizing German during the postseason, they can incorporate his arm more frequently during the regular season, giving the other starters more rest to mitigate fatigue.

So far this season, German is utilizing a curveball, 4-seam fastball, change-up, and sinker as his primary pitches. In the month of August, German is utilizing his curveball at 36%, generating a .212 batting average against with a 34.2% whiff rate and 21% put-away rate. His fastball is averaging 93 miles an hour, using it at 30%. It is producing a .212 average as well with a 14.3% whiff rate and 7.9% put-away rate.

The numbers indicate that his curveball doesn’t get a ton of positive break but is still a productive pitch. Nonetheless, his sequence is working dangerously well over the past few outings, which presents the Yankees with value down the stretch as they look to mitigate fatigue for Gerrit Cole, Nestor Cortes, and Frankie Montas.