Yankees are getting an unbelievable version of trade acquisition Harrison Bader 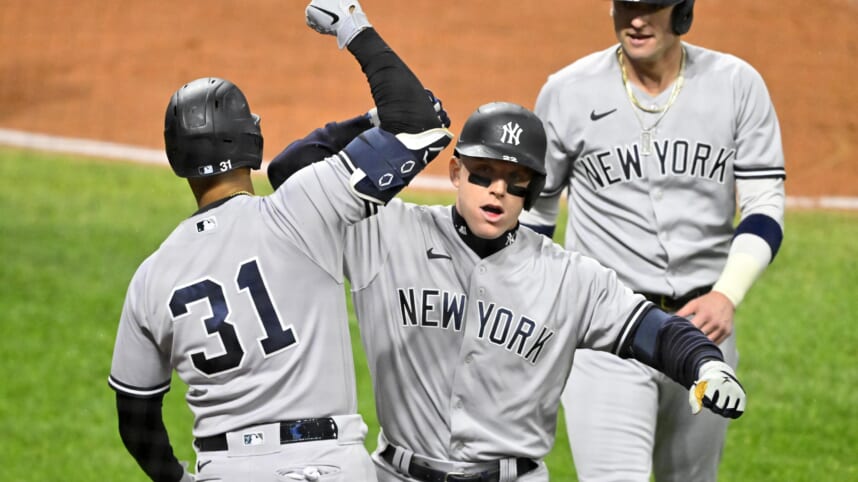 When New York Yankees general manager Brian Cashman traded Jordan Montgomery to the St. Louis Cardinals in exchange for Harrison Bader, who was at the time wearing a walking boot, nobody truly understood the value he would bring to the team.

Bader was dealing with plantar fasciitis, still weeks away from being healthy and taking meaningful at-bats. However, Cashman didn’t see Bader as a regular season contributor, he was looking ahead toward the postseason for when his value would really shine through.

After four postseason games against the Cleveland Guardians in the ALDS, Bader has already recorded three homers, four RBIs and is hitting .286 across 14 at-bats. It seems as if Cashman was right at the end of the day; Bader was going to be an impact player during the playoffs.

After Sunday’s win over the Guardians to tie the series up at two apiece, ace Gerrit Cole spoke about Bader’s impact and how electric he is as a player.

“He’s electric, really, an electric player,” said Gerrit Cole. “Impact player. Impact player. Got moxie, got baseball awareness, gets after the ball on defense. A lot of good things to say about that guy.”

The Yankees needed Harrison Bader all along:

When Cole is going out of his way to acknowledge the talent of an individual, you know their value. Bader didn’t perform extraordinarily well during the regular season, hitting .250 with a 29.4% on-base rate across 86 games. His numbers were a bit down, including his defensive efficiency, but he tracks incredibly well in the outfield and clearly has untamed power.

“It’s been awesome,” said manager Aaron Boone. “He worked so hard to get back, worked his tail off rehabbing, showing up in a walking boot. And right away trying to just endear himself in the clubhouse, and absolutely has. … He loves to play the game. The power showing up here in the postseason for us has been big.”

After hitting just five homers across 313 plate appearances during the regular season, Bader has already hit three in 14 at-bats. Clearly, the Yankees’ mantra of “hitting strikes hard” is panning out since Harrison has contributed significantly toward two of the team’s wins against Cleveland.

In the end, Aaron Hicks still managed to find himself starting in the outfield, with Oswaldo Cabrera being shifted to shortstop to replace Isiah Kiner-Falefa. Hicks was disappointed about the Bader acquisition at the time, but the demise of others has offered another opportunity to the struggling outfielder.

The team desperately needs Bader to show up once again on Monday in a Do or Die game, so hopefully, he has a bit of juice left in his bat to help his team over the hump.