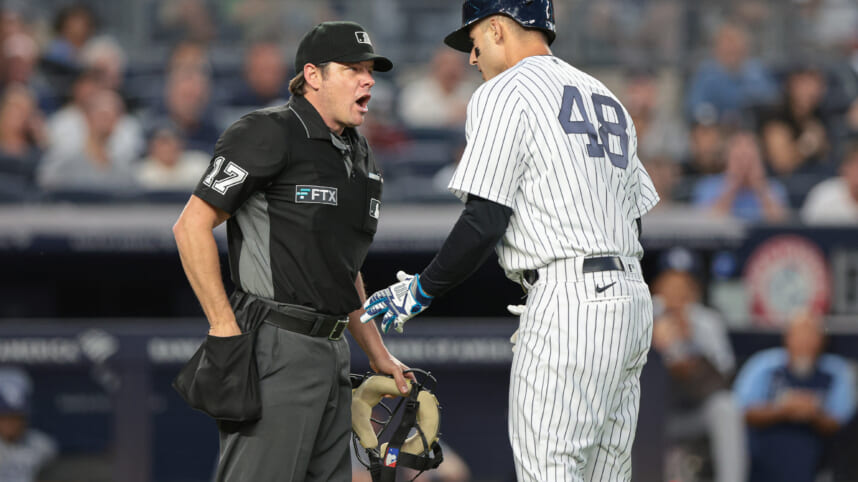 The New York Yankees could’ve easily walked away with a win against the Tampa Bay Rays on Monday if they had a bit of run production to aid a fantastic performance from Gerrit Cole.

However, if you ask starting first baseman Anthony Rizzo, he will blame the umpires for disrupting the flow of the game and missing obvious calls.

In the bottom of the 3rd inning, with a runner on first base and one out, Rays pitcher Ryan Yarbrough plunked Rizzo on the leg. The breaking ball seemed to be sweeping in behind Rizzo’s legs, so he leaned forward to get out of the way. Instead, the ball hit him on the thigh, but the umpire believed he leaned into the pitch to get on base.

After a lengthy discussion, Rizzo slammed his helmet in the dugout and threw a tantrum. By the looks of it, he does lean forward, so the pitch hits him on the leg but given the curve on it, you can make the argument it seemed as if the pitch was going behind him.

Rizzo roasted the umpire after the Yankees’ loss:

After the loss, Rizzo completely roasted the umpire, stating he was “screwed over,” and they can’t be making such blatant mistakes at the highest level.

“Whenever you feel like you got screwed over on a call, at any time it’s annoying,” Rizzo said. “We’re out here competing at the highest level. I’m up here talking to [the media]. I feel like umpires have zero accountability when they miss something like that.”

In the end, the Yankees lost 4–0 after Lou Trivino had a brutal 9th inning, giving Tampa Bay an extended lead. However, the Yankees’ bats have gone cold in recent days. They haven’t scored a single run in two games, desperately needing to break that streak.

They will look ahead to Tuesday night against the Rays once again to help catapult themselves out of their worst stretch of the 2022 season.