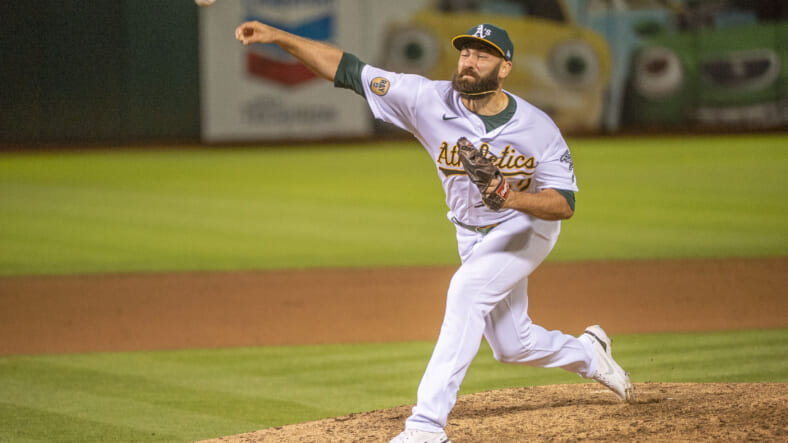 The New York Yankees made two big moves on Monday afternoon, acquiring Scott Effross from the Chicago Cubs and adding Frankie Montas from the Oakland Athletics. Injecting quality pitchers into the bullpen and starting rotation should help the Yankees tremendously with their World Series aspirations.

What are the Yankees getting in Lou Trivino?

Trivino is an interesting bullpen arm, tossing 32 innings this season but featuring a 6.47 ERA. However, he’s increased his strikeout rate tremendously and generates a ton of ground balls. He features a 12.66 strikeouts per nine rate, 67.3% left on base rate, and immaculate 53.2% ground ball rate. The issue is that he’s giving up a career-high in home runs; 1.41 per nine, and a 20.8% HR/FB ratio.

Trivino utilizes a sinker, 4-seam fastball, slider, cutter, and change-up primarily. His top two pitches by usage are his sinker and 4-seamer. Interestingly, he’s seen significant decreases in his curveball usage and 4-seam usage, struggling to utilize his sinker efficiently.

Trivino’s sinker is generating a .442 batting average against with just a 15.2% WHIFF rate and 20.8% put-away rate. These are some of his worst numbers after posting a 3.18 ERA last season over 73.2 innings. Clearly, he’s capable of far better performances, meaning pitching coach Matt Blake could unlock a better version.

If the Yankees can decrease Trivino’s homerun vulnerabilities, he will be a much more efficient bullpen arm that can help down the stretch to mitigate fatigue. The Yankees have control over Trivino until 2025 but is arbitration eligible this upcoming off-season. However, he will be a cheap player moving forward.