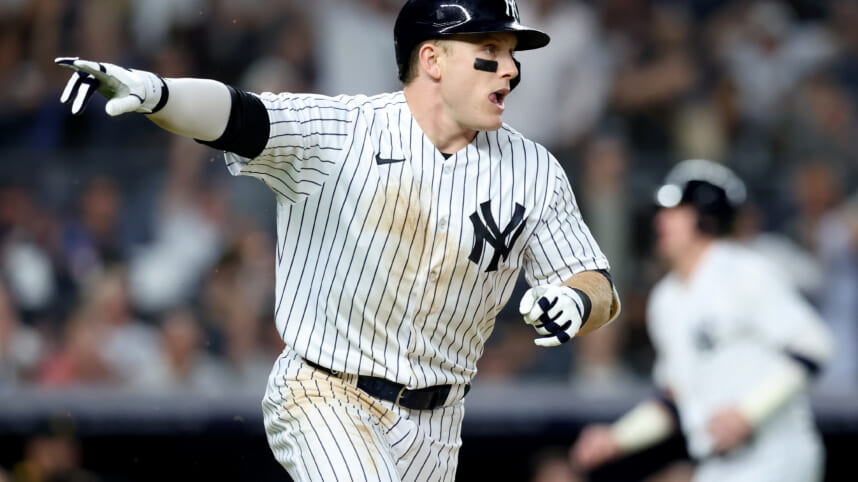 When the New York Yankees pulled off a last-second trade with the St. Louis Cardinals to acquire outfielder Harrison Bader, the entire fan base was absolutely shocked.

Moving on from Jordan Montgomery certainly wasn’t expected, but he’s had some success with the Cardinals, earning a 3.11 ERA over 63.2 innings. However, the Yankees had the playoffs in mind — they had already factored in Montgomery’s potential usage, which wouldn’t have amounted to much.

Instead, they used Monty as leverage to find an elite defensive centerfielder that could impact the game in the blink of an eye.

The Yankees got immediately value from Harrison Bader:

Bader made his impact known immediately, recording two hits and three RBIs in his first appearance for the Yankees. In fact, he recorded six RBIs over his first three games combined, but he’s since quieted down a bit as the regular season winded down. However, his abilities on base are next to none and his range in centerfield can’t be compared.

Aside from his tangible traits, Bader has leadership qualities and brings essential energy to a team that has World Series aspirations. In fact, Bader grew up a Yankee fan, making this a dream come true.

I’m not an overly religious person. I just wasn’t raised to really kind of believe that things just are meant to be, and there’s some higher power that maybe is moving pieces around to make things happen for individual people. But I will tell you that in this trade that happened, and what you just mentioned, obviously being from New York, this truly is the very first time in my life where I have questioned my thought process in thinking maybe there is something that is a higher power that’s making this all happen. ’Cause I could not be more ready, I could not be more excited. … It just makes so much sense to me for it to not have all been planned out by someone or some thing. This is what I train for, this is what I dream about as a young kid. I’m at heart a still young kid just playing baseball living out my dream, my passion every single day. This is never work, this is a game. I’ve thought about this for a long time and just kind of feel it coming right on the corner. … I’ve been thinking about this moment my entire life. … But as excited as I am, it’s overcome with just focus and determination, and just a readiness to go out there and be dangerous and have nothing to lose.

There are some things in life that certainly make you think about a higher power simply because of the coincidence or magnitude. Being traded to the Yankees broke that barrier for Bader, who is gearing up and resting ahead of the ALDS against the Cleveland Guardians on Tuesday.

For the Yankees over 14 games, he hit just .217 with a 24.5% on-base rate, but he did collect nine RBIs and two stolen bases. His strikeout rate ballooned to 30.6%, but that is simply because he hasn’t seen many pitches since being placed on the injured list for weeks dealing with plantar fasciitis. The veteran outfielder is still laser-focused on winning the World Series, expressing his motivation for the next step.

Bader is seemingly healthy now, suggesting that he could make a significant impact during the playoffs as the starter in center. Of course, that would shift Aaron Judge to right field and Oswaldo Cabrera to left, which is the expected starting outfield moving forward.