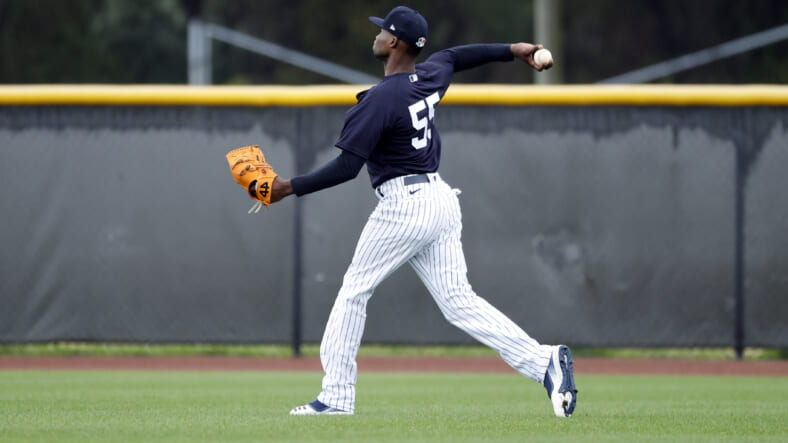 The New York Yankees have already activated pitcher Luis Severino, who hasnâ€™t pitched since the 2019 playoffs. He hasnâ€™t pitched yet, but he will be a member of the bullpen for the stretch run. As it turns out, he wonâ€™t be the only hurler coming back from injury this week.

Before last nightâ€™s game against the Texas Rangers, Yankeesâ€™ manager Aaron Boone confirmed that the team is about to activate fellow Dominican right-hander Domingo German, who has been out since August 1 with right shoulder inflammation.

Per Boone, by Tuesday or Wednesday, German is expected to be activated from the injured list, providing another option for the decimated pitching corps.

â€œDomingo could be activated in the next day or two potentially,â€ Yankees manager Aaron Boone said on Monday. â€œHe threw (two innings) in his (Triple-A rehab) game Saturday, so that might make him eligible (Tuesday). Weâ€™ll see.â€

Getting ready to return to the Yankees

That rehab appearance Boone is referring to went well, as German pitched at Triple-A Scranton/Wilkes-Barre on Saturday, allowing only one run on two hits and two bases on balls over two innings.

Itâ€™s unclear if German will function as a starter, as a traditional bullpen arm, or as a multi-inning weapon. The fact is that his presence will be a welcome sight for a team that lost Darren Oâ€™Day and Zack Britton for the season and is currently without Jonathan Loaisiga, their relief ace, with a rotator cuff injury.

For the season, the Yankeesâ€™ right-hander has a 4.45 ERA in 18 starts and 97 innings. He has fanned 95 hitters and maintains a very good 1.16 WHIP. His command is not always on point and he is prone to allowing hard contact, but he is a solid pitcher who can be of use for what will come.

He could be an ideal multi-inning weapon because he would be able to air his upper-90s fastball out and throw his excellent secondaries without having to worry about facing the opposing lineup two or three times.