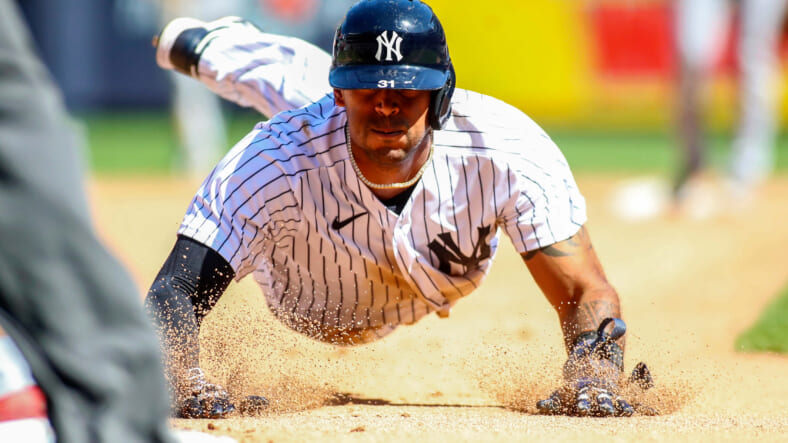 Despite having a 10.5-game lead in the AL East, the New York Yankees have had their fair share of adversity this season. Inconsistent performances and injuries have hit the team in waves the past few weeks, but one of the more notable players going through a cold streak is starting outfielder Aaron Hicks.

Fast-forward to the first week of August and Hicks is once again going through another cold streak, showing the inconsistencies that have plagued him all season. He’s hitting .125 with a 25% on-base rate and one RBI over seven games. In fact, he has just three hits in his last 35 at bats.

It is no surprise that general manager Brian Cashman was reportedly looking to unload his contract at the trade deadline a few days ago. Hicks is in the middle of a seven-year, $70 million deal with three seasons left until a club option for the 2026 season that includes a $1 million buy-out.

Hicks knows that he needs to perform better moving forward, reflecting on his season up to this point and using the word “horrible” to describe it.

“Horrible. Honestly, horrible,” Hicks said of his season in an interview with The Athletic. “My on-base percentage has still been high, but there’ve been so many highs and lows. I started off the season good. I was hitting for a high average for a while. I wasn’t really hitting for much power. I then went into a deep slump where I had a lot of loud outs and wasn’t really doing much. I was struggling with guys in scoring position. That’s just the game.”

The New York Yankees simply aren’t getting a good return from Hicks:

Diving into his advanced analytics, Hicks ranks in the 28% percentile in average exit velocity and 20th percentile in hard-hit rate. He’s recording a 34.4% hard-hit rate with a 5% barrel rate, the lowest since his 2016 season. In addition, he has the lowest exit velocity of his career at 87.9 mph. Recording just 11 barrels over 348 plate appearances is simply unacceptable for a player that is earning $10 million per season on a lengthy contract.

Aaron doesn’t know what is future looks like with the Yankees. Cashman could try to move him in a bigger deal during the winter months.

“I don’t know. I’m signed here for four more years. You can’t really think about any of that stuff,” Hicks said of his future with the Yankees. “That’s really out of your control so it’s pointless to think about all of that stuff because it doesn’t really matter. The team is going to do what it’s going to do. I’m just out here trying to help this team win. All we’re trying to do is win a championship here, so if I’m a guy that’s in the lineup, cool. If I’m not, it is what it is. Having a tough year is not what you want to do.”

Cashman already executed a deadline trade to acquire Harrison Bader from the St. Louis Cardinals in exchange for lefty starter Jordan Montgomery. Come the postseason, Bader will take over in centerfield with Andrew Benintendi in left and Aaron Judge in right.

Prospectively, that will send Hicks to the bench with Giancarlo Stanton manning the designated hitter spot.

Since the Yankees clearly can’t rely on Hicks as a high leverage player, the expectation is they will try to move on from him after the season concludes. However, he has a few months left to right the ship, but hosting a 98 wRC+, indicating he’s 2% worse than the average MLB player certainly doesn’t indicate he can recover his form from four years ago when he hit 27 homers during the 2018 season.