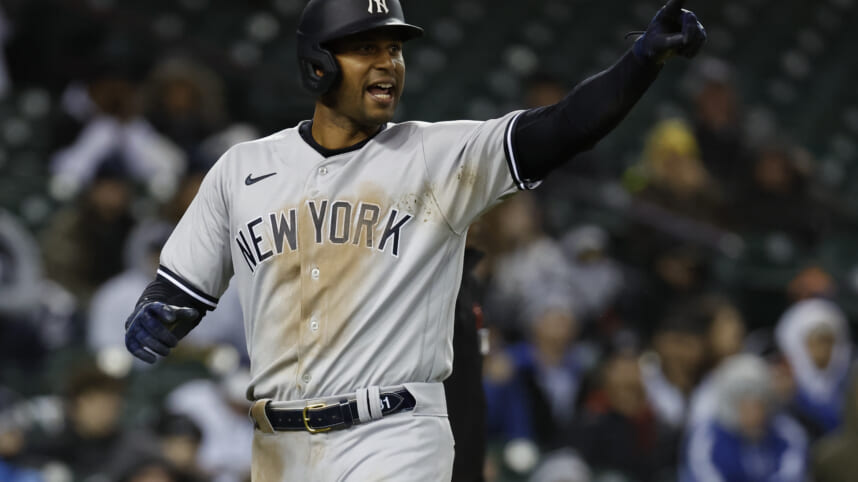 Coming off two consecutive losses, the New York Yankees trounced the Milwaukee Brewers on Sunday afternoon by a score of 12–8. Courtesy of Aaron Judge, Anthony Rizzo, and Oswaldo Cabrera, who combined for 10 hits and seven RBIs, the Bombers found themselves in the win column.

The Yankees currently host a 5.5-game lead over the Toronto Blue Jays in the AL East as they prepare to head back home to face off against a bad Pittsburgh Pirates team. The Pirates have lost four consecutive games to the Mets, presenting the Yankees with a ripe opportunity to extend their lead in the division.

However, the next few weeks are imperative for figuring out who will be starting during the playoffs. One player who’s on the fringe is outfielder Aaron Hicks, who is not even sure what his future looks like with the team let alone the role he’ll play down the stretch. Despite his lack of security, the veteran outfielder did contribute two hits and a solo homer in Sunday’s win.

Prior to the game, Hicks indicated that missing time ultimately impacts his consistency, sending a message to management that he will play better if they offer him more opportunities.

The Yankees have already gone down this road:

Unfortunately, manager Aaron Boone has already gone down that path, and Hicks didn’t answer the call. Ever since the Yankees acquired Andrew Benintendi at the trade deadline, Hicks hasn’t factored in much. He’s only enjoyed 35 at-bats this month, hitting .171 with a 21.6% on-base rate. However, when he was playing on a nearly everyday basis in August, he hit .137 with a 22.4% on base rate.

“I expect [Bader] to come in and start playing every day, as he should,” Hicks said Saturday. “He got traded here to help us win. We need him to be himself to win a World Series. When I get opportunities, I’ll try to make the most of them, but it’s extremely hard when I play a game and then I’m off for three days and now there’s another outfielder out there.”

The Yankees haven’t even returned Harrison Bader yet, who is currently enjoying rehab assignments in the minor leagues. Bader has been looking sharp and is nearing a comeback, providing him with a decent sample size of action at the MLB level before the postseason begins.

Hicks spoke about the prospect of moving on after the 2022 season comes to an end.

“I don’t know. The Yankees are gonna have to make a decision and I’ll wait for whatever happens. It’s not really my call.”

Reports indicated that general manager Brian Cashman spoke to several teams about offloading his contract, which expires in 2025. Hicks is still owed about $10 million per season over the next three years. Trading him is the only way the Yanks can recoup some of that money.

The more likely scenario is that Hicks is packaged with another player during the winter months. The Yankees would likely pay a portion of his salary until it eventually expires. Hicks noted that former Yankee, Joey Gallo, has seen improved play since joining the Los Angeles Dodgers, so a change of scenery shouldn’t be ruled out of the equation.

“Joey started to play better with the Dodgers and I saw on [a] podcast that [Los Angeles manager] Dave Roberts played a big part of that, with him wanting to get the most out of his players,’’ Hicks said.