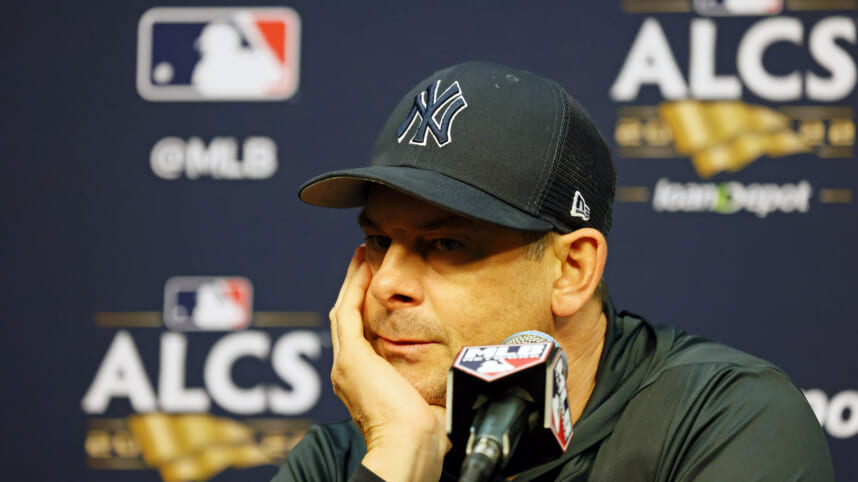 The New York Yankees‘ offense has gone quiet during the playoffs, notably against the Houston Astros over the first two games of the ALCS. With Game 3 scheduled for Saturday night, the Bombers will have a tough task ahead of them, despite traveling back to the Bronx and having their home fans cheering them on.

The Yankees are trying to overcome a few big speed bumps:

Once again, the playoffs pose serious adversity for the Yankees, who are faltering on several fronts. One issue that has been swept under the rug is a lack of communication between management and the players.

Given Aaron Boone refused to use Clay Holmes in Game 3 of the ALDS and afterward said he was only active in “emergency” situations, questions began to arise. Even Holmes himself stated that he was ready to go if need be, so it was odd that Boone relayed a different sentiment. Starting pitching, Luis Severino directly pointed at Boone and Matt Blake for answers.

The lack of communication didn’t stop there, though, as Boone interestingly threw one of the team’s hottest hitters in Harrison Bader, under the bus for not knowing he was leading off in Game 2 against Houston.

Bader was unaware that his spot in the lineup had changed, but Boone indicated that every player is sent the finalized lineup before the game, and some are more diligent about checking it than others.

One would tend to think that professional baseball players would be aware of changes to the batting order and how that impacts their approach, but seemingly there are some that simply don’t care.

However, instead of publicly acknowledging Bader‘s lack of due diligence, the Yankees could’ve easily handled this behind the scenes. Considering the trade acquisition is hitting .273 with a 38.5% on-base rate, including four homers in the playoffs, maybe tossing him a hot potato wasn’t the most efficient managerial move.