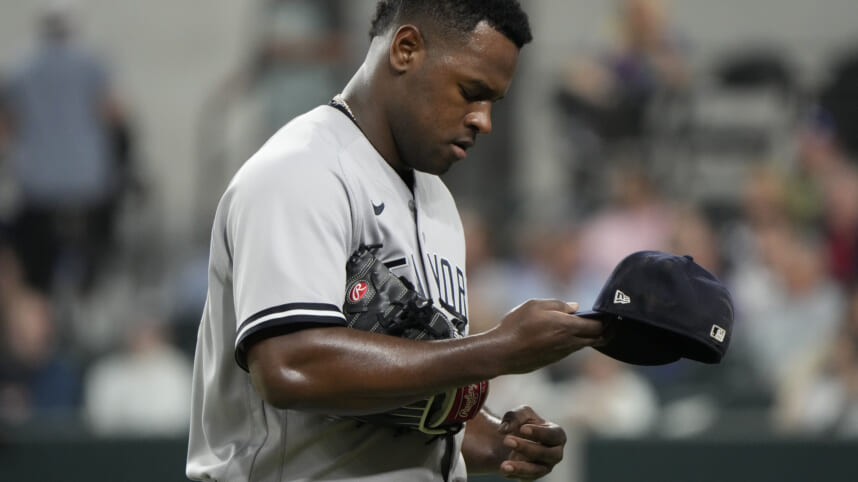 The New York Yankees defeated the Texas Rangers 3–1 on Monday evening, but the star of the game was starting pitcher Luis Severino, who had yet another stellar performance during a comeback season.

Severino hasn’t played a significant part since 2018, and having just spent a few weeks on the 60-day injured list, Severino is gearing up toward a playoff start after Frankie Montas suffered a shoulder injury.

The Yankees saw the best of Luis Severino on Monday:

Clearly, Severino is ready for a bigger assignment, throwing seven hitless innings against Texas in the win, striking out seven batters, and forcing seven ground balls. If not for one walk, Severino would’ve had a perfect game up to that point, but it was quickly ruined by relief pitcher Miguel Castro, who gave up two hits immediately and an earned run.

The 28-year-old starter fought to stay in the game, but manager Aaron Boone had to make a difficult decision.

“No one wants [to be] taken out in that situation, but I understand it,” Severino said. “I think it was a good decision. I don’t want to go out there and kill myself and not be good for the postseason. We’re looking at the big picture.”

Removing Severino from the contest was the right move, despite what might’ve happened. The Yankees are looking toward the postseason and not a meaningless game against the Texas Rangers with the AL East already locked up and secure.

“It still is a decision that sucks to have to make,” Boone said. “It puts a little damper on the night, honestly. It’s not a fun thing to have to do when a guy is in the highest land in the league and he’s out there doing his job at a really high and special level. To have to be the one that shuts that down is not fun, but one you gotta do.”

Having just returned from injury, this is the start the Yankees needed to see if they weren’t confident about Severino in the playoffs. He’s otherwise had a fantastic 2022 campaign. Over 95 innings pitched, Severino hosts a 3.41 ERA, 3.44 xFIP, 9.95 strikeouts per nine, a 79.6% left on-base rate, and 43.8% ground ball rate.

In addition, the movement he’s getting on his pitches is borderline elite. In fact, his slider generates 13% more vertical movement than the average pitcher and 71% more horizontal movement. His cutter generates 129% more break.

For a team that has never lost faith in Sevy, they’ve been waiting patiently for years to see this type of consistency.