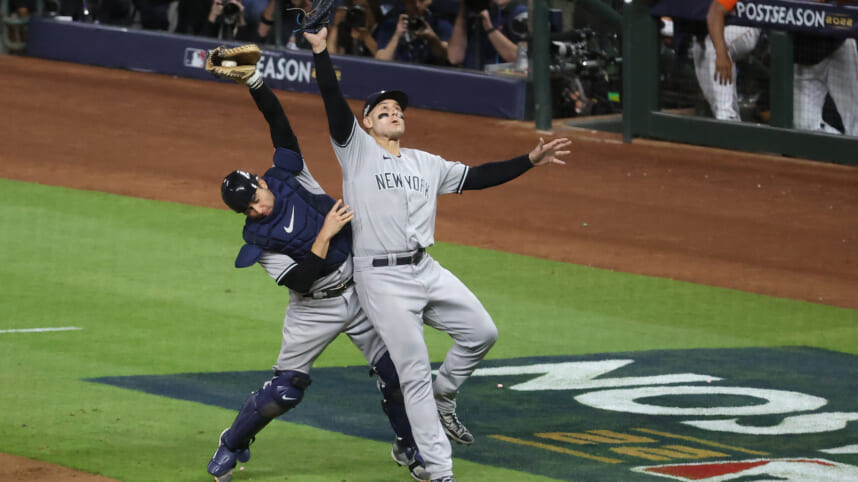 The New York Yankees aren’t going to win any playoff games against the Houston Astros if they can’t hit the baseball effectively. The Bombers scored just two runs in Game 2 of the ALCS compared to Houston’s three, courtesy of an Alex Bregman three-run homer off Luis Severino in the bottom of the third inning. Aside from that one poor pitch, Severino was electric in his second start of the postseason.

However, a lack of run support doomed the Yankees from the get-go, as both of their runs were unearned thanks to a Framber Valdez error. The Yankees struck out a combined 13 times, making it 30 times across two games against Houston. They aren’t going to be winning any series with those types of numbers, but manager Aaron Boone took it to another level, blaming the weather for his team’s lack of production.

The Yankees had their big bats ready to go in the eighth inning, but they weren’t able to get anything going, despite Aaron Judge missing a home run by just inches. After the game, Boone suggested that the wind affected the ball, which he believed to be a 390-foot homer.

Instead, the Yankees were stuck at two runs, desperately trying to find a way to spark a comeback. Unfortunately, they struck out twice in the ninth inning after Josh Donaldson worked an impressive walk. The Yankees pinch-hit catcher Kyle Higashioka for Matt Carpenter, who struck out for the seventh consecutive time this postseason.

Unfortunately, the Yankees now stare down the barrel of a two-game deficit in the ALCS but are preparing to host Houston over three games in the Bronx. The Astros have had trouble in Yankee Stadium before, and with Gerrit Cole and Nestor Cortés taking the mound over the next two games, they certainly have a pitching advantage. However, Houston has one of the best bullpens in baseball. Based on their previous rotation, they could feature Lance McCullers Jr. as their starter on Saturday. McCullers posted a 2.27 ERA during the regular season but barely pitched, tossing just 47.2 innings of ball.

Saturday’s game is a must-win for the Yankees in New York.