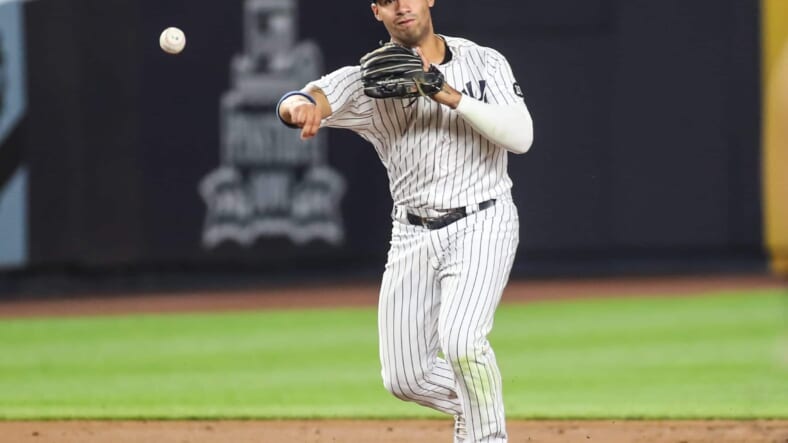 The New York Yankees are preparing to take on the Tampa Bay Rays on Tuesday evening, but they will do so without shortstop Gleyber Torres.

The Bombers are currently on a four-game losing streak, having lost six of their last seven games and scoring just six runs since their last victory. Walking away with a win against Tampa would be a step in the right direction, but it wonâ€™t alleviate all of their struggles, ranging from pitching to inadequate offensive production.

If those two factors werenâ€™t enough, letâ€™s add fielding to the mix, as starting shortstop Gleyber Torres was benched on Tuesday by skipper Aaron Boone after giving up several errors this week. Heâ€™s committed three errors in the last two games alone, and he showed his emotions in the dugout, slamming his helmet against the ground in frustration.

Instead of Torres, the Yankees will utilize Gio Urshela at SS, who is hitting .257 on the year and represents a far superior defender compared to Torres.

Yankees lineup for Tuesday’s game against the Rays:

8. Brett Gardner
9. Clint Frazier
Urshela has a .923 fielding percentage this season at shortstop and .966 at third base. He has allowed five errors over 48 games, an adequate number representative of his talents with his glove. Torres, on the other hand, hosts a .952 fielding percentage with nine errors over 45 games.
While general manager Brian Cashman indicated last year that Torres is a better second baseman, the Yankees resigned DJ LeMahieu to hold it down at the position. Unless Torres can make a dramatic improvement over the next few months, Cashman may have no choice but to consider a strong shortstop market next off-season. Hopefully, it doesnâ€™t come to that, and Gleyber can take a step forward and at least reduce the number of errors he produces on a weekly basis.