Yankees: 3 players heating up at the perfect time 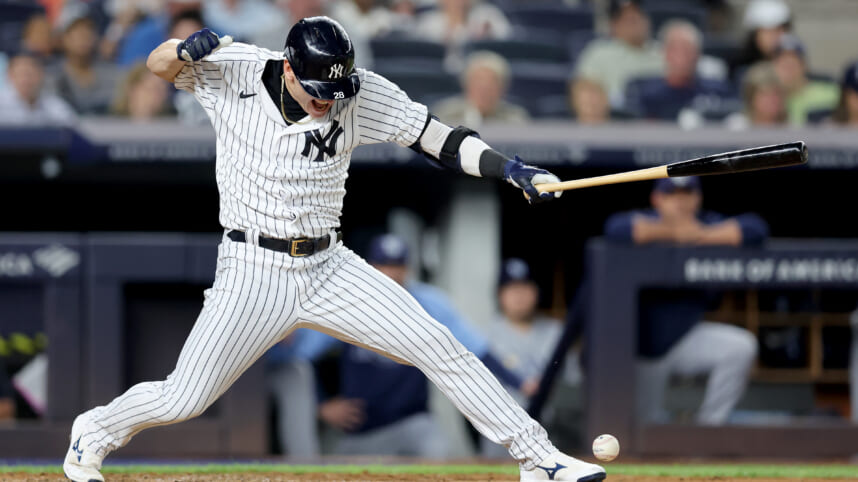 The New York Yankees finally got back in the win column on Sunday afternoon, courtesy of Aaron Judge and Anthony Rizzo completely taking over. After losing the first two games of the series against the Milwaukee Brewers, the Bombers desperately needed to flip the script, currently sitting 5.5 games over the Toronto Blue Jays in the AL East.

The Yankees have approximately 16 games left before the playoffs, taking on the Boston Red Sox, Toronto Blue Jays, and Baltimore Orioles as divisional games.

However, some polarizing players this season for the Bombers have begun to hit a hot streak, representing perfect timing with the final stretch of regular season games preparing to unfold.

Three players heating up at the perfect time for the Yankees:

There was a good argument to make that Josh Donaldson should’ve been benched several weeks ago, but he’s finally carrying his weight with a solid September in tow. He hit .239 with a 34.6% on-base rate, including three homers and 15 RBIs in the month of August, starting off September on a bit of a cold streak.

On the month, he’s hitting .220 with a 32.7% on-base rate, but he’s recorded hits in four consecutive games. In fact, over his last seven games, he’s tallied seven hits.

Donaldson has smacked two homers in his last three games, indicating he might be seeing the ball a bit better than before.

On the year, he features a .222 average with a 31% on-base rate, so he’s clearly ramping up with the regular season finally winding down. Maybe becoming a new father has inspired him once again, or at least we can hope.

Considering Donaldson is the penciled-in starter at third base moving forward, the Yankees desperately need him to be productive offensively. His slugging capabilities are essential, and Giancarlo Stanton is struggling, which has been a tough reality.

This month, Stanton is hitting .130 with a 21.6% on-base rate, so Donaldson has had to step up to supplement his lack of production.

While Isiah Kiner-Falefa has struggled defensively at times, his bat is finally alive. On the season, IKF features a .267 average with a 32% on-base rate, including three homers and 46 RBIs. He’s also tied his career-high with 20 stolen bases across 130 games.

His numbers in August were dismal, hitting .231 with a 30% on-base rate, but this month, he’s hitting .313 with a 39% on-base rate. IKF has hit two of his three homers in September, including eight RBIs with just five strikeouts over 48 at-bats.

If we are going to criticize IKF when he’s struggling, it’s only fair to commend him when he’s performing well. He’s undoubtedly picked up the slack lately, providing assurance in the bottom half of the order.

The Yankees are still unsure if Oswaldo Cabrera will make regular appearances in the playoffs, but his bat is finally coming alive. Cabrera is hitting .228 with a 29% on-base rate over 28 games this season.

Defensively, he’s offered exponential value, recording a perfect fielding percentage in right field over 171.2 innings. In fact, he has 9.0 defensive runs saved above average to his name — one of the best metrics in baseball across his sample size.

The Yankees were testing Cabrera in left field prior to Sunday’s game, so it is possible that he transitions once Harrison Bader returns from his rehab assignment. In the month of September, Cabrera is only hitting .220 with a 30% on-base rate, but he’s been far more effective over his last seven days.

Cabrera is hitting .333 with a 47.8% on-base rate, including one homer, two RBIs, and five walks in the last week. If he can remain a bit more consistent, the Yankees might have no choice but to feature him in the postseason.