Will the Yankees test their hand at a potential reunion this offseason? 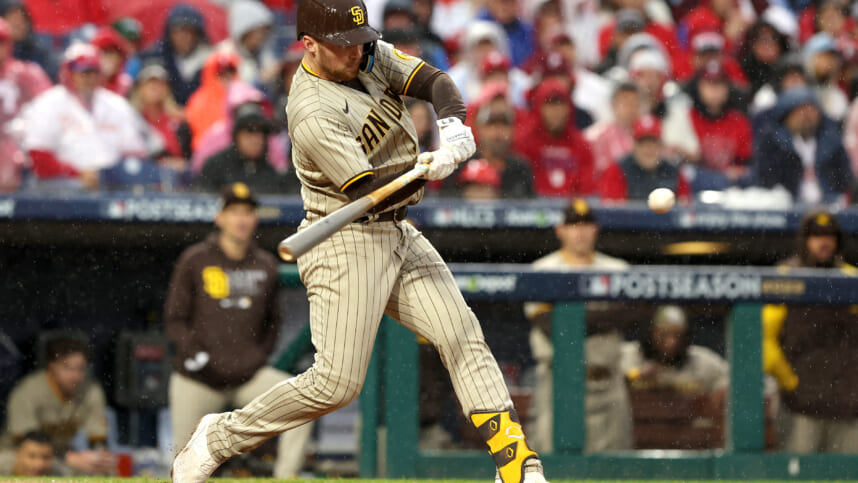 When the New York Yankees acquired Brandon Drury before the 2018 season, many people believed that he would solve the Yanks’ third base dilemma and that the team could tap into his talent.

Drury was a solid player for the Diamondbacks the two seasons prior, putting up respectable numbers in various facets of the game. In ’16 & ’17, Drury OPS’d cumulative .774, hit a combined 29 HR, and posted a wRC+ just around league average at 97. He was a quality baseball player that was able to man a solid third base and play a few different positions as well.

The general consensus was that the Yankees had gotten a young player with solid peripherals and only needed a few tweaks to his game to get to that next level. As we all know, that was completely off.

Why the Yankees wanted Brandon Drury in 2018:

Drury had a few parts of his game that the team really liked, specifically his hand speed and swing plane when he would swing at pitches. He struck out roughly 20% of the time and was a free swinger, but the team really wanted to dive deep into his launch angle.

In 2016 Drury’s launch angle was 7.7 degrees, and in ’17, it was 9.3. The ideal LA sweet spot is between roughly 10 degrees and 30 degrees. P.J. Pilittere and the Yanks’ staff saw a diamond in the rough with Brandon Drury, and coming into 2018, hopes were high that the team had finally found a quality everyday 3B. The team had been rolling out Chase Headley at third, and while he wasn’t bad by any means, the team wanted to get more out of that position.

Headley posted a 105 wRC+ in 2017 but would end up being dealt to the Padres the following offseason and metaphorically fell off a cliff into shark-infested waters before ultimately retiring during the season.

Drury was seen as a guy that could easily help smooth over some problems, and the Yankees loved to see his contact-driven approach and solid barrel rate numbers during his time in Arizona. Sadly, we never really got to see just what Brandon Drury could offer, as he would battle numerous health issues during the few months he spent with the organization. He would only suit up for 18 games with the organization and eventually left for the Toronto Blue Jays. Drury and the staff were clearly never on the same page, and Drury himself didn’t even know what was wrong with him for a good part of the beginning of the season.

It would later be revealed that Drury had battled severe vertigo, was battling vision issues, and partial blindness, and had raging headaches that made it so he could barely move. The demise of Drury that year was a crazy blip in the Yankees’ future timeline, as this is the year where Miguel Andujar exploded onto the scene. Dujar came out of nowhere, his 27 HR and 47 2Bs, en route to a 129 wRC+ rookie campaign.

Sadly, the team would hold onto that one season’s worth of performance for Andujar and would reject numerous trade offers for him, holding the firm belief that he was a player for their future. Andujar, however, could not play defense at third, and the team finally realized that over time. Had Drury simply not gotten vertigo, the current state of the Yankees could look dramatically different. That’s what makes baseball such a wildly beautiful sport, is any move will have a ripple effect that may not even be thought of in the moment.

Now, here we are, with a chance to potentially get it right this time around. Brandon Drury is certainly not the elite hitter that the Yankees had thought they could turn him into, but he has come a long way to get where he’s at. Following the catastrophe with the Yankees, his time spent in Toronto was no better, even though he was actually able to play.

Drury Took the Road Less Traveled Following his time in the Bronx:

He would spend 2.5 years with the Blue Jays, hitting only 15 HR over 159 games. His best wRC+ he posted during his time with the Blue Jays was a 66 in 2019 (he posted a -10 in 2020). Everything the Yankees organization had wanted to test out on him ended up coming to fruition, as Drury’s launch angle and barrel % both went up, but his results were atrocious.

Drury clearly didn’t click with the Jays, and he eventually would find himself back in NY in 2021, this time across town in Queens with the Mets. Drury was able to reinvent his career, became a very solid defensive infielder, and saw a career-best 114 wRC+ year with them. He only played in 51 games, but those 51 games gave him the shot he needed to right the ship and show teams what he was capable of. Drury ultimately reverted back a bit to what made him the touted player he was, as he lowered his Launch Angle from 19.3 degrees the season prior to a much more suitable 11.7.

The biggest difference for him was something that was mostly out of his control, and that is that he finally got a bit luckier in the eyes of the BABIP gods. Drury’s BABIP from 2018-2020 was roughly .230, but in 2021 it soared to .328. With that little boost of confidence and finally feeling like something is going his way, Drury signed with the Reds for the 2022 season on a minimum deal.

This year was the year Brandon Drury had been waiting for. It was the Yankees’ dream 2018 season, just four years later. Drury OPS’d .813 this season, clubbed 28 HR (12 more than his career high), and posted a 123 wRC+. Sadly, he wasn’t as successful when he got traded to the Padres, OPSing just .725 over the 46 games he suited up for the brown & gold. Yet, Drury is as intriguing of an option on the market as I’ve seen in recent memory. Are his 2021 and 2022 seasons the better indication of his skills, or is it more 2018-2020? Drury himself is often soft-spoken and has never come out of the gates with an inflated ego, and he could be a key piece of the puzzle for 2023.

Drury may not be a “franchise player,” and he may not even be a star, but not every baseball player has to be a 5 WAR demigod year-in-year-out. Keith Law recently dropped his Top 50 Free Agents list, and while there are a multitude of “yikes” moments on it, he believes that Brandon Drury may only go for $5/$6 million and will likely see a year or two-year offers come his way.

The Yankees showing interest in Drury would truly mean we’ve come full circle, but there may not be a better value on the market. Drury posted a 3.0 fWAR this past season, and assuming FanGraphs’ model of $-to-WAR value of 1 WAR is worth $7M, Drury exceeded that 3X over. He certainly shouldn’t be the only piece the Yanks go out and inquire about, and if he is… it’s going to be a long offseason. However, Drury would fill-in third for Josh Donaldson — who should be strapped to a rocket and sent to the moon, and he could easily spell more off days for Rizzo (assuming he returns), which would allow for his back to stay in shipshape for the course of the year.

Brandon Drury is not this game-changing player that will immediately make anyone that signs him contenders. He is, though, a key spoke in what could be a successful wheel of a team. There’s no doubting the Yankees’ desire to improve and get that elusive no. 28, but work must be done. Drury is just a piece in the grand puzzle, but even with his bang-average — if not below in ’22 — defense, I feel like he could be a huge contributor. Just imagine five years later, Brandon Drury fulfills the prophecy.