WATCH: Yankees use rain delay to slip-and-slide on infield tarp 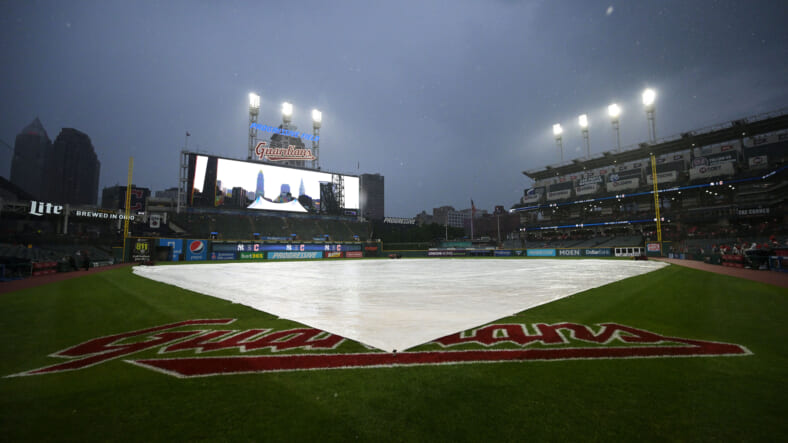 Jul 1, 2022; Cleveland, Ohio, USA; The tarp covers the field as the game between the Cleveland Guardians and the New York Yankees is delayed at Progressive Field. Mandatory Credit: Ken Blaze-USA TODAY Sports

The New York Yankees are facing off against the Cleveland Guardians in a doubleheader on Saturday after Friday night’s game was rained out. However, the Bombers didn’t let the evening go to waste, and several staffers used the infield tarp as a slip and slide.

Dressed as Aaron Judge and Anthony Rizzo, the two staff members jogged all the way to the outfield as fans called out their names, just to be tricked.

With Rizzo’s uniform hanging by the wayside on a much more scrawny staff member, they made their way out of the deepest part of centerfield.

With third baseman Josh Donaldson cackling the entire way, the club members ran full speed toward the tarp, sliding across it as the team broke out in laughs.

It was one of those entertaining moments filled with pure joy from a Yankee team that is currently heading toward the end of a 20-game stretch without a break.

After Saturday’s doubleheader and a series finale against Cleveland on Sunday, the Yankees will enjoy their first day off in quite some time before heading to Pittsburgh and then Boston next week.