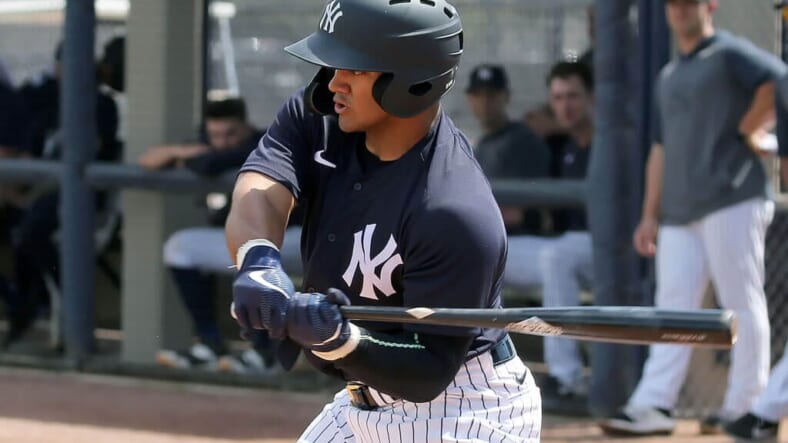 One of the New York Yankees’ most exciting prospects is Jasson Dominguez, who currently features with the Tampa Tarpons in Low-A ball. Having just started his journey in the minor-league system, Dominguez possesses all of the tools that Mike Trout once had during his early years. Of course, there’s no guarantee that the 18-year-old will ever reach that level of play, but if he continues to develop at this rate, he could be featuring with the top team in two or three years.

At this point, Dominguez is best known for his highlight videos, launching baseballs into the stratosphere with his insane power.

The most hyped and tooled-up international prospect in recent memory, Dominguez engenders comparisons to some of the best athletes in baseball history, such as Bo Jackson, Mickey Mantle and Mike Trout. The Yankees spent $5.1 million, all but $300,000 of their bonus pool and a franchise record for an international amateur, to sign him out of the Dominican Republic in July 2019. Some clubs officials thought he might be able to handle making his pro debut in low Class A at age 17 in 2020, but it became a moot point when the coronavirus pandemic scuttled the Minor League season.

Jasson ranks as the number 17th overall prospect in Major League baseball and given his incredible attributes, it’s not surprising to see him among the best.

This past season, Dominguez hit .252 with five homers, 19 RBIs, and nine stolen bases. He only featured in 56 games, but he made an impression, despite striking out 73 times.

He is exactly the type of player the Yankees love, a homerun-hitting athletic maestro who sacrifices strikeouts for the long ball. With the potential to be an above-average player and plenty of time to continue developing, the Yankees can enjoy the next few seasons watching him extrapolate on his abilities and add more talents to his toolbox.