The Yankees should reunite with this talented bullpen arm 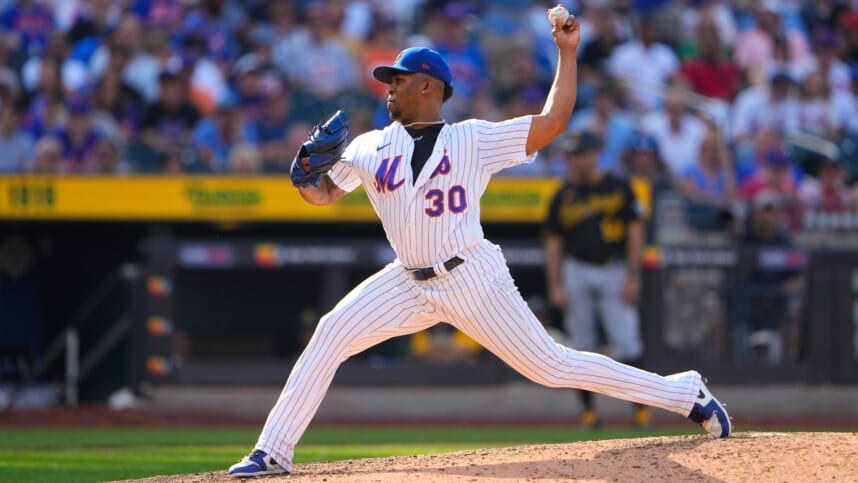 The Yankees currently roster two left-handed relievers in their bullpen with, Lucas Luetge and Wandy Peralta. While they certainly have enough relievers who specialize in handling both lefties and righties, it doesn’t hurt to add to the left-handed side of the bullpen.

The Yankees go into 2023 with some question marks in their bullpen but nothing that they can’t patch up quickly. Free Agency is underway, and while the Yankees won’t be (and shouldn’t be) shopping at the top of the market for relievers, they most certainly should be exploring the depth of the market.

Back in March of 2022, the Yankees dealt LHP Joely Rodriguez to the crosstown rival Mets for RHP Miguel Castro, a reliever swap between two unlikely trade partners. When evaluating the deal, there’s a case to be made the Yankees came away on the losing side.

While this isn’t anything to cry about or rip Brian Cashman for, it’s an interesting trade to reflect upon. Rodriguez posted a 2.84 ERA for the Yankees down the stretch when acquired from the Joey Gallo deal, becoming somehow the best player for the Yankees in that deal. While the ERA was high for Rodriguez in 2022, there are a lot of positives that suggest Joely Rodriguez is someone to buy-low on for the 2023 season. As a left-handed groundball arm, the Yankees should look to reunite with the Dominican-born reliever.

Joely Rodriguez’s changeup is arguably the best pitch in his arsenal, with a low-spin rate of just 1,069 RPMs giving is great dropping action (35.1″ of vMov) and a 38.5% Whiff%, and it gets 9.4″ of vertical separation from his fastball, a positive trait for an offspeed pitch. It’s his go-to secondary pitch, but he used it far less to start the season. The splits between the transition to a heavier emphasis on his changeup are drastic, and they’re signs of tangible progression.

Let’s dive into why his changeup usage increasing could be the reason he performed significantly better.

Joely Rodriguez boasts a changeup that does a multitude of things for the southpaw. It generates a high amount of whiffs (38.5%) and is highly effective at putting batters away (23.0%), making it a pitch that Rodriguez can rely on in two-strike counts to finish a batter off. He went to his changeup 52.5% of the time in these two-strike counts, and he did so with plenty of success. When we look at the previous split mentioned, we also see that his reliance on the changeup in two-strike counts increased from 48.1% of the time to 60.7% of the time, a 12.6% increase that fixed an issue Joely would run into with two strikes.

Cameron Grove’s PitchingBot Command Grade for his changeup details a gradual progression from a positive Expected Run-Value (bad for pitchers) to a negative Expected Run-Value (good for pitchers. Just as elite stuff is remarkably important, a certain level of command is required to get the most out of that pitch. Rodriguez’s changeup is a pitch we’ll see him frequent more in 2023 if the strides in command are maintained.

Despite Isiah Kiner-Falefa’s poor OAA, the Yankees ranked 8th in infield OAA (15) in 2022. They boast a strong infield defensively that’ll only improve with Oswald Peraza at shortstop next season, and while they may move on from Josh Donaldson, DJ LeMahieu posted 8 DRS and 4 OAA in just 385.2 innings. Oswaldo Cabrera and Anthony Volpe will be added to the infield, and while Torres is a mystery, he was a 9 DRS defender in 2022. They’re going to have one of the best defenses in MLB again if things go to plan, and that could greatly benefit Joely Rodriguez.

The Mets had a strong infield defense (10 OAA, 11th), but with his improving command and a slightly better infield defense behind him, we could see that 53.8% GB% prevent more runs as well. Joely should be a double-play machine, generating whiffs when necessary and relying on his sinker when he needs to. The Yankees’ infield defense provides him the opportunity to have both of these things, and he also has the added benefit of the best framer in the game.

There isn’t a single catcher you’d rather have behind the dish than Trevino, and we could see some of those borderline pitches that a catcher like James McCann can’t stick turn into strikes with the Yankees. Higashioka also provides strong framing value, so there is the added benefit of getting the majority of borderline pitches called in your favor.

Strong Resume for Success on the Yankees:

One of the biggest details in all of this is theestablishedh success in New York already. His time was brief, but Rodriguez was one of the best deadline acquisitions the Yankees made. Overshadowed by the brilliant Clay Holmes, he posted a 2.84 ERA and 3.01 FIP in his stint in the Bronx. Having success and comfort in New York is something we see some athletes struggle with, but that is part of the mental part of baseball that’s hard to evaluate from an outside perspective. Rodriguez also projects extremely well for the 2023 season, with Steamer setting his median outcome as an above-average bullpen piece.

With a mid-3 ERA, Rodriguez would be one of the better left-handed options on the market. Per Eno Sarris’ Stuff+ model, Joely Rodriguez registered a 114.2 Stuff+, making his arsenal one of the nastiest in baseball. With how Matt Blake and Sam Briend have modeled the organization to heavily utilize sinkerballers and Brian Cashman’s previous interest in Rodriguez, this could be a great pairing for both sides. Rodriguez would have the chance to not only rebound value-wise but also do so on a larger market with more attention.