The Yankees should have 2 people on the hot seat 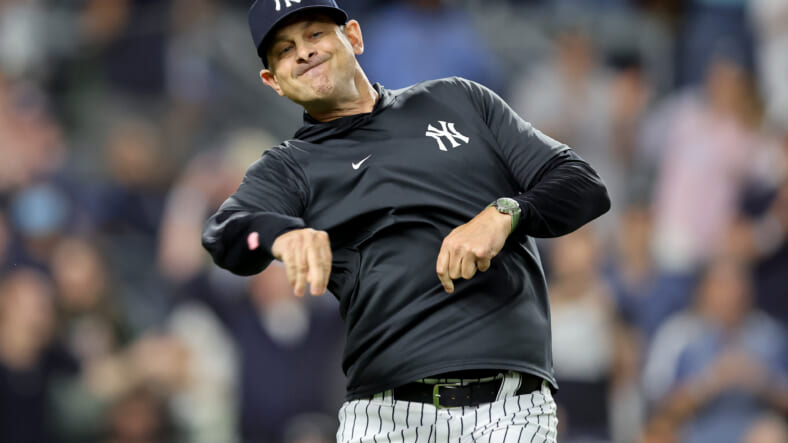 The New York Yankees haven’t made it to the World Series in over a decade, and that streak looks to extend beyond the 2022 season, having fallen three games behind the Houston Astros in the ALCS.

Despite having one of the largest payrolls in baseball and a plethora of talent, the Yankees continue to come up short thanks to a myriad of reasons, ranging from coaching mishaps and players not showing up in the postseason.

There once again seems to be a ton of turnover expected this upcoming off-season, but the Yankees should be putting some pressure on the people who are making decisions within the club.

Two people who should be on the hot seat for the New York Yankees:

Aaron Boone signed a three-year contract after the 2021 season with a club option for the 2025 campaign. Despite the extension, the Yankees could look at some of the egregious moves he made during this playoff sequence that led to the team’s demise.

Ranging from awful in-game management and roster construction, there’s a real argument to make that the team can’t count on Boone to be his best self from the managerial spot. In addition, there has been an unacceptable rate of miscommunication within the clubhouse.

While it is incredibly unlikely that the Yankees move on from Boone this year, if they continue to come up short in big moments, they will need fresh blood. The team simply looks uninspired during the playoffs, which is unacceptable, given how they performed during the regular season. There is no excuse for players like Aaron Judge to be getting on base at less than 10%. Aaron has always been a player-first manager, but at some point, this team needs a bit of discipline.

Given the team’s dominance during the regular season, Boone seems to be a fantastic coach when nothing is on the line. Of course, playoff seeding is depending on regular season records, but given the longevity of the year and lackluster teams in the league, the Yankees are easily able to take advantage of better matchups.

During the playoffs, though, the Yankees don’t get a bad team to cushion their fall, they have to show up every single day inspired and ready to dominate. We haven’t seen that version of them, but that also plays into the players they currently have and the decisions that general manager Brian Cashman made this past off-season.

In some respects, Cashman has done a great job finding talent for this team, but with the payroll he has and the decision-making he’s shown in the past, there have been many more failures than playoff wins.

If the Yankees want to perennially go to the ALCS and get knocked out by a team with more consistent playoff hitting and better pitching, Cashman is a great option to be extended for the foreseeable future. Some of the decision-making he produced this past off-season is having a profound effect on the Yankees’ ability to win games. Josh Donaldson is being paid $25 million to offer minimal offensive contributions, whereas Houston retained Justin Verlander for the very same price, who is in line to win the Cy Young award.

Let’s not even begin to discuss Joey Gallo and how much of a flop that was. The acquisition of Isiah Kiner-Falefa ended up being a dud as well, forcing Boone to replace him midway through the ALDS against the Guardians. He has struck gold with a few players, notably Nestor Cortes, Jose Trevino, and the acquisition of Harrison Bader, but there are too many weak spots in the lineup to win games against better teams.

The problem is, Cashman is great at finding lesser talents who rise to the occasion compared to spending big on free-agent signings or trade acquisitions. Frankie Montas may end up being one of Cashman’s biggest regrets.

The reality is simple, making it to the playoffs is a successful model in of itself, but given the talent and payroll the team has, not making it to the World Series for over a decade is simply unacceptable. With that being said, it seems to be more of a managerial issue than a GM one, given the lackluster usage of the players and the failure to get the most out of them in big moments. With that being said, both Boone and Cashman are responsible.