The Yankees screwed up the progress of one rookie player badly 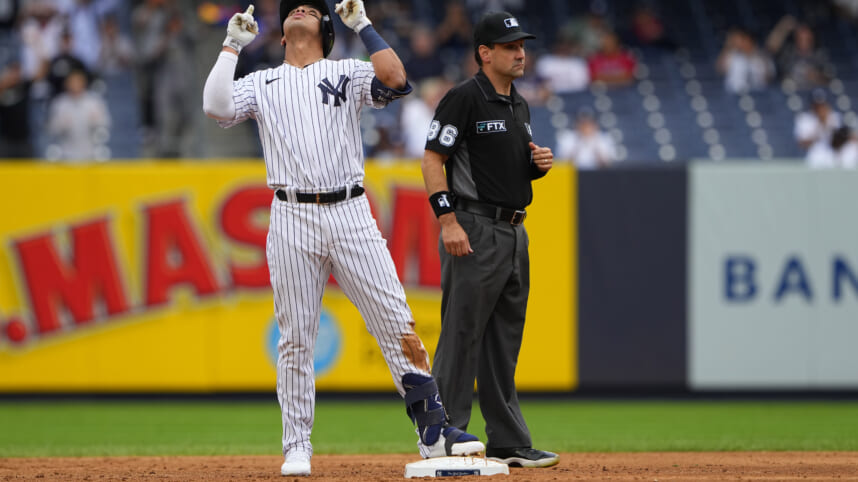 The New York Yankees might have included rookie infielder Oswald Peraza on the playoff roster if DJ LeMahieu would’ve been healthy enough to play.

LeMahieu is the team’s best utilityman with his ability to play every infield position, but since he has a fractured foot that is limiting his movement significantly, manager Aaron Boone had to make a supplemental move.

Because of LeMahieu‘s absence, he had no choice but to include Marwin Gonzalez on the roster, despite spending all of Monday evening trying to figure out who he would include between Marwin and Peraza. The numbers clearly indicate that the 22-year-old rookie was the better option, but that would leave first base without a backup, and Anthony Rizzo has been dealing with some injuries recently.

Got comparison’s sake, Marwin Gonzalez finished the 2022 regular season hitting .185 with a 25.5% on-base rate, six homers, and 18 RBIs. Alternatively, Peraza hit .306 with a 40.4% on-base rate, including a homer and two RBIs over 18 games. While the sample size was small, he’s considered a top prospect for a reason, immediately showcasing his offensive qualities and efficient glove at shortstop and third base.

However, the Yankees should’ve been given Peraza far more reps to end the season than he was experiencing, especially with Isiah Kiner-Falefa struggling throughout the campaign offensively and botching several routine ground balls.

In fact, IKF had two poor defensive plays in Tuesday’s win over the Cleveland Guardians in Game 1 of the ALDS. He did come through big when he slapped a single in the bottom of the 5th inning that sneaked by outfielder Oscar Gonzalez, turning a single into a triple.

Hindsight is always 20/20, but there was an obvious move to give Peraza more opportunities during the regular season, especially given his slugging metrics. He recorded a 30% hard-hit rate with a 5% barrel race, whereas IKF posted a 1.2% barrel rate.

The Yankees prefer their sluggers, but IKF has been valuable as a contact hitter this year, hitting .261 with a 31.4% on-base rate. He is a high batting average player, but he struggles in other facets that Peraza excels in, notably crushing the baseball and providing stellar defense at shortstop specifically.

Nonetheless, if LeMahieu returns for the ALCS, I wouldn’t be surprised to see the Yankees swap Peraza for Gonzalez on the roster. However, if not for Peraza’s value during the postseason, they should’ve given him more reps simply to determine whether or not he can be a long-term solution moving forward beyond the 2022 season. It is also possible they wanted a decent sample size to boost his trade value, and after the way he performed, his stock is at an all-time high.