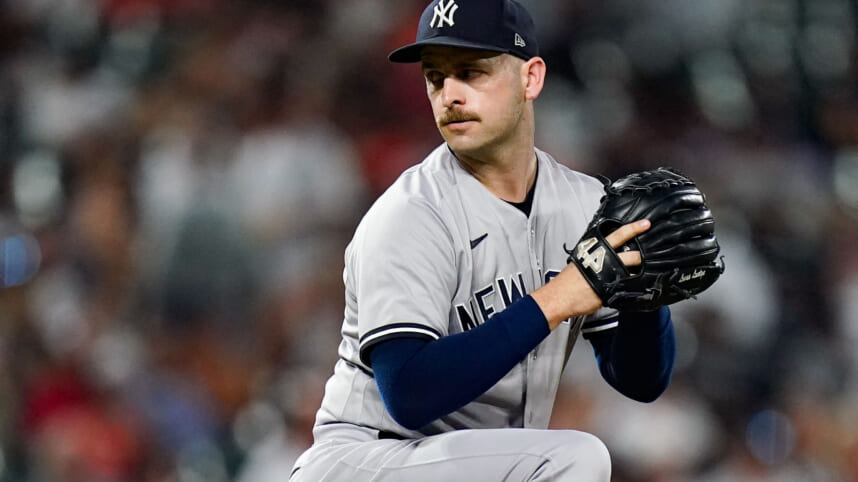 New York Yankees reliever Lucas Luetge has often been the bane of bad bullpen management in the past, but he seems to have carved out a tidy role in this year’s pen.

Whilst arms like Clay Holmes, Ron Marinaccio, Jonathan Loaisiga, and others have been handed the back-end duties in close games, Luetge has been given the reigns to a unique role.

His “multi-inning mop-up” role cannot be validated enough, as, without Luetge, there would be numerous occasions where the team expends its bullpen — excuse me, its arm barn.

On the season, Luetge has been used mostly in lower leverage situations, but don’t let that fool you from the importance of his innings. His year line sits at a 2.55 ERA to go with a 3.03 FIP across 49.1 innings.

Luetge’s slider and cutter have both been above-average pitches, which he throws a combined 86% of the time, and his swooping curveball oftentimes buckles batters. However, taking it a step further, since his multi-inning appearance out of the bullpen on June 29th against the A’s, Luetge has been as dominant as they come.

To put it simply, Luetge has found his role, and the team has maximized his value. Across low leverage situations on the year, Lucas Luetge has posted a 2.12 ERA over 34.0 innings worth of work whilst dominating batters with soft contact and swing-and-miss stuff.

His Hard Hit % given up is in the 100th percentile according to Baseball Savant, with the Average Exit Velocity given up also being in the 99th percentile. When Luetge gets hit, its usually soft contact and weak flyballs, with the very rare homerun exception.

Luetge may not be as big of a name on this team because of this role, but without him, the team would struggle finding someone to go multiple innings.

Since 6/29, no one on the team has more multi-inning relief appearances than Luetge, as he has racked up 10 such in that time. Yesterday’s 2.1 scoreless innings were huge for a short bullpen that desperately needed someone to step-up following the first game of the doubleheader. Luetge answered the call and once again quietly did exactly what was needed.