The Yankees might have made a huge trade deadline mistake 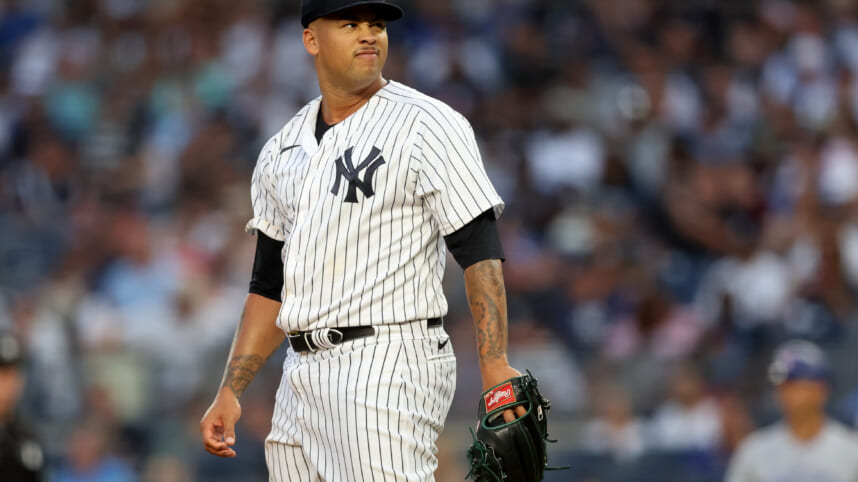 New York Yankees general manager Brian Cashman knew he needed to make a starting pitching acquisition at the trade deadline, but his first and primary target was Luis Castillo.

The Seattle Mariners offered a monster package to acquire Castillo, one the Yankees simply didn’t want to match, which would’ve included Anthony Volpe, their star short-stop climbing through the farm system.

Did the Yankees make a mistake trading for Frankie Montas?

Instead, they pursued Oakland Athletics starter Frankie Montas, who featured a 3.18 ERA over 104.2 innings with the Athletics this season. However, there is reason to believe that acquisition might’ve been a mistake up to this point, considering he features a 7.01 ERA and 4.45 xFIP over 25.2 innings with the Yankees across five games pitched. His strikeouts are down immeasurably from 9.37 to 7.01 per nine.

The Yankees have changed his pitch sequence a bit, lowering his split-finger fastball usage by about 8% and increasing his 4-seam fastball by 6%. These marginal differences could be match-up related, but his fastball in the month of August is generating a .333 batting average against with a 19.6% whiff rate. Batters are hitting .304 off his sinker whereas they hit .222 against it in July.

The minor shift in pitch usage doesn’t seem to be a major factor in his demise, but simply playing against more competitive teams on a squad that has elevated expectations. The pressure simply might be getting to Montas, who was arguably the best player on the Athletics before lowering his status on a star-studded Yankee team.

However, manager Aaron Boone can’t rely on him during the postseason if he’s incapable of putting together efficient performances. He’s given up 12 earned runs in his last three games combined, including 20 earned runs over 25.2 innings since joining the Yankees.

He’s produced just 20 strikeouts in that time span. Montas has been doing a good job limiting walks, but with his strikeouts down, it is difficult to pinpoint a direct cause for his regression. In fact, his numbers look relatively good across the board in terms of their comparison to his time with Oakland. It could be a mental issue, but it seems Montas is getting more unlucky than anything, which should hopefully change in the near future.

However, up to this point, it is clear the Yankees may have struck out at the deadline acquiring him from Oakland, especially if he struggles during the playoffs.