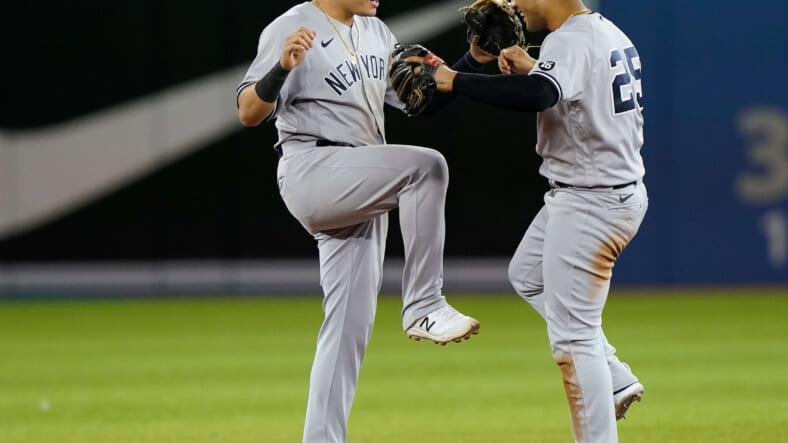 The New York Yankees are heading into the 2022 off-season with one goal in mind, finding a starting shortstop for the future. While they wait for young prospect Anthony Volpe to reach the major leagues, the Bombers must find a supplement with quality defense to fill a position that Gleyber Torres simply couldnâ€™t hold down.

Torres struggled considerably during his two seasons at SS, earning a .952 fielding percentage this past season over 108 games. Torres picked up 18 errors on the year, falling well below the league average of .974% in the fielding efficiency category. At this time, we can expect Torres to shift over to second base, with DJ LeMahieu potentially filling in at first base depending on what the team does with Anthony Rizzo and Luke Voit.

The infield could realistically endure a few changes this off-season, but one big piece of the puzzle is Gio Urshela.

â€œI played my entire minor leagues [and major leagues] at third base. Then, moving to shortstop, I kind of liked it,â€ Urshela said Tuesday, per the NY Post. â€œI really enjoyed playing shortstop because you get more involved in the game. Every play, youâ€™re going to be involved. Third base, I just wait for the [ball] and thatâ€™s it. You donâ€™t move that much. It feels a little bit different, like you get more tired probably after a game [at shortstop].

Urshela stated that he liked playing shortstop after Torres was moved, as he was able to be a more important part of the defense. The 29-year-old infielder posted a .970 fielding percentage and allowed just two errors over 28 games and 200 innings. Urshela clearly offers more sufficient defense compared to Torres, but should the Yankees give him the starting job without considering other options?

There is no question that Gio is an important part of the Yankees’ team, hitting .267 with 14 homers and 49 RBIs this season. He missed a handful of games, which hurt the team defensively at times. The front office could target bigger names like Carlos Correa, Trevor Story, Corey Seager, or even Javier Baez.

Depending on how much money management wants to spend on a potential supplement, they could stick with Urshela and reduce the cost exponentially, moving LeMahieu to third base and retaining Rizzo on an extension.

While fans would likely prefer to bring in a big-name free agent, general manager Brian Cashman is running out of opportunities to spend big in free agency, and ownership may not allow him to cross the $210 million luxury tax threshold this off-season.

With more starting pitching needed and a few supplemental options for the back end of the roster, the Yankees need to be extremely careful unless theyâ€™re willing to push beyond their comfort zone and spend aimlessly to build a winning team in 2022.