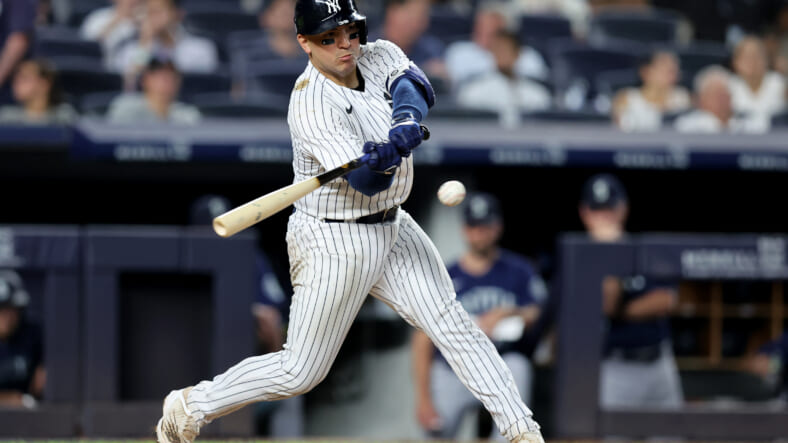 Every now and then, the New York Yankees need to give star catcher José Treviño a day off, but when that day occurs, the steep drop-off in talent at the catcher position exposes itself.

Treviño has been a godsend for a Yankee team that traded Gary Sanchez this past off-season to the Minnesota Twins. Sanchez is having another uninspiring campaign, but Treviño made it to the All-Star game after being plucked off the Texas Rangers for a few questionable prospects.

In fact, one of the players the Yankees sent to the Rangers was Albert Abreu, who they eventually released and ended up right back where he started, but making an impact.

Trevino has been fantastic for the Yankees:

The 29-year-old catcher is hitting .265 with a 30% on-base rate this season, including 10 homers and 34 RBIs. He’s doubled his homerun total this season compared to 2021. He features a career-low 17.1% strikeout rate and career-best 5.1% walk rate. Treviño has always been known for his defensive qualities, but he’s putting together a solid offensive season in addition.

Behind him, manager Aaron Boone has relied on Kyle Higashioka, who has quickly fallen out of favor. The 32-year-old catcher is hitting a measly .197 with a 25% on-base rate this season, including six homers. He hosts a 69 wRC+, indicating he’s 31% worse than the average player.

Treviño, on the other hand, has earned a 116 wRC+, showcasing his value. Defensively Treviño hosts a 54.1% strike rate, the best in all of baseball. He’s dominant in the lower portions of the strike zone, elevating his glove and getting extra calls in the process. Higashioka ranks 22nd with a 47.4% strike rate and two catcher framing runs, whereas Treviño has 10.

In fact, comparing the success of both catchers with Gerrit Cole on the mound, the star pitcher has a 2.74 ERA with Treviño behind the plate and 5.40 ERA with Higashioka.

Additionally, batters are hitting. 193 against Trevino with Cole on the mount and .255 against Higashioka.

Ultimately, if anything were to happen to Treviño and the Yankees were forced to utilize Higashioka during the postseason, the team may fall apart. That’s how big the difference between the two players are this season. Alternatively, they could call up Ben Rortvedt from their Triple-A affiliate after rehabilitating from an oblique and knee injury this season, but he’s untested.

More pressing is the need to give Treviño some days off down the stretch after playing 75 games this season with an increasing role given his success.