The Yankees infield could go through drastic changes this off-season 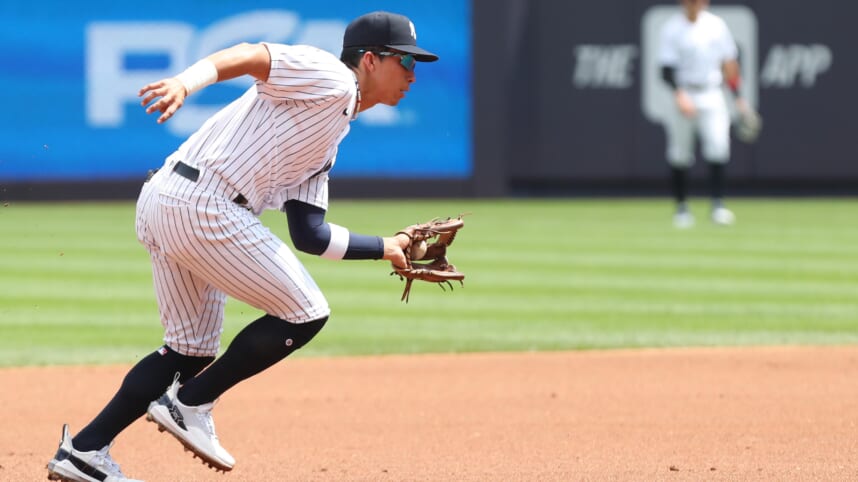 Based on comments from Yankees owner Hal Steinbrenner, the team’s infield could go through some drastic changes this off-season, especially with some big contracts needing to be offloaded. Notably, the Yankees would prefer not to pay Josh Donaldson $21 million for the 2023 season, despite general manager Brian Cashman expressing confidence in the veteran.

However, they have plenty of talent to smooth over the hot corner if they find a taker for Donaldson, even if that means paying a portion of his deal.

Steinbrenner indicated that the infield could be shaken up next season, with top prospects Oswald Peraza, Oswaldo Cabrera, and Anthony Volpe all in line to receive playing time.

The question is, where will they all play? Peraza will likely slot in at shortstop, Volpe could end up taking over second base if Gleyber Torres is traded, and Cabrera could fill in at several spots if needed. I expect Oswaldo to be more of a utility option in both the infield and outfield, preserving his value.

This means that Donaldson, Torres, and Isiah Kiner-Falefa could all be replaced, and that is not to mention the Yankees could lose Anthony Rizzo to free agency with the Houston Astros expected to make a serious run at his services.

When it is all said and done, the team could feature two rookies in the infield, LeMahieu on the hot corner and Rizzo at first, given the team manages to retain him, which is an expectation. Cashman already offered him the qualifying offer at $19.65 million, which he rejected.

2B: Oswaldo Cabrera —> Anthony Volpe (once called up)

The Yankees should fully commit to their youth:

Committing to youth is not a bad idea, especially since Pereza flashed elite defensive quality, notably at shortstop. Cabrera finished the season with nine defensive runs saved above average and put together a few stretches of solid hitting, which is something he needs to work on but will conceivably improve with experience.

Volpe, on the other hand, hasn’t touched an MLB field yet and just transition to Triple-A Scranton toward the end of the 2022 season. He would likely need a few weeks to get his footing before making the jump, but he could skip Scranton altogether if he performs well in spring training with the Yankees.

Nonetheless, rumors indicated that Torres was on the trade block at the deadline in August, suggesting that he could be on the move once again. Torres is a solid player with good power and above-average defensive capabilities at second base, but the Yankees still view their long-term plan as essential, meaning Volpe could slide in if Gleyber is moved.

Ultimately, keeping the price point down at several premium positions will give the team a bit more flexibility with their salary space, specifically when it comes to extending star slugger, Aaron Judge.