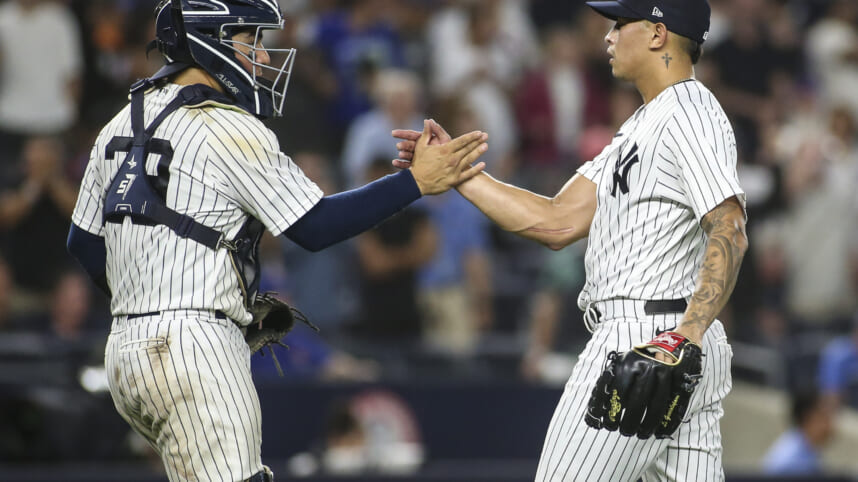 The Yankees have had to look to other arms to fill the void, with arms like Wandy Peralta, Lucas Luetge, and rookie sensation Ron Marinaccio picking up the slack. With a lot of negatives lately, Jonathan Loáisiga finding his groove shines like a ray of sunlight, and he’s throwing up zeroes like it’s 2021 again.

Jonathan Loáisiga Has Re-Discovered His Sinker

In comparison to last season, Jonathan Loáisiga’s sinker had less “sink” this season. This lead to a lot more hits and quality contact as his sinker didn’t sink enough to get hitters to roll over, rather, it sunk enough to get right into a hitters swing path.

This sinker to Yoan Moncada is absolutely hammered, and rightfully so. It’s got great velocity (99 MPH) and a ton of run, but it’s a deadzone fastball that hitters in today’s game are going to crush. It isn’t 2010 where 99 is this unhittable velocity hitters aren’t prepared to face everyday. In the months of August and September, there’s more drop on his sinker, and that movement has proved to be crucial for Loáisiga’s success.

In the months of August and September, we’ve seen the most drop on his sinker this season, and the results reflect positive change.

With a vastly improved sinker, Loáisiga’s back to generating the soft contact and easy outs we’re accustomed to seeing. His quality of contact has gotten dramatically better, and this has made up for the decrease in strikeouts.

Jonathan Loáisiga has been extremely hard to barrel up since returning from the IL, as his quality of contact against is just absurd.

Batters simply don’t know how to generate consistently hard contact off of Loáisiga, and this has led to a 2.84 ERA and 2.69 FIP over those 19.0 IP.

This is a pitch Loáisiga would get beat on with a sinker that has less drop to it, but instead, Yandy Diaz shatters his bat as he gets beat to the spot and grounds into an easy inning-ending out. The Yankees would hold on to win 2-1, and it makes what Jonathan Loáisiga did there even more important. If hitters can’t get the barrel to the ball and find themselves generating soft groundballs, you’ll see plenty of double plays and stress-free outs on that sinker running down and in on righties, even with a low K%.

His strikeouts being down could be a concern, but when you look at how often he’s generated whiffs and chases, there’s potential for the strikeouts to start piling up again.

Due For Positive Strikeout Regression

Jonathan Loáisiga’s K% is down from 24.4% to 20.8% this season, but the numbers suggest that he should start getting more swings and misses. In comparison to last season, batters chase more and whiff more against Loáisiga. The issue isn’t the quality of pitches at this point, and this reflects over a recent stretch where he has a 26.5% K% over his last 10.1 IP. The fundamental difference is that Loáisiga is throwing more pitches in the zone, as his percentage of pitches in the zone has gone down over 7% this season. While batters are indeed expanding the zone more against Loáisiga, that doesn’t offset the large volume of pitches out of the zone in comparison to last season. While I don’t think Loáisiga should be just throwing it down the middle, I do believe Loáisiga’s command being a little crisper and finding the strike zone a little bit more will help him put batters away and entice hitters to chase more.

We could see a version of Loáisiga who’s striking out ~24-25% of batters while rarely giving up loud contact, and that’s an arm that would be considered a top 10-15 reliever in this game. Having Loáisiga back in form is a revelation for Aaron Boone and a Yankee bullpen re-discovering their identity as a unit.