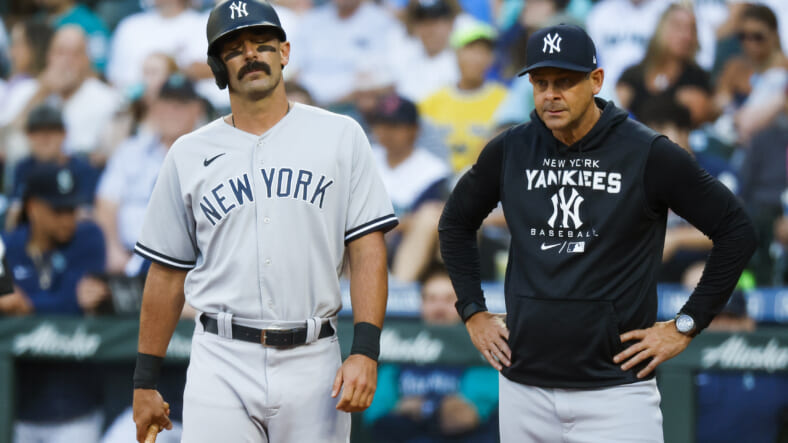 The New York Yankees will need to show up offensively in Game 5 of the ALDS on Tuesday afternoon against the Cleveland Guardians. They haven’t scored more than five runs in each of the last four games played, suggesting they haven’t reached their peak capabilities. Game 5 would be a great time for the Bombers’ offense to completely take over and showcase one of their vintage double-digit performances, but it will take everybody and then some to get the job done.

With Cleveland starting Austin Civale as their primary pitcher on Tuesday afternoon, the Yankees have a significant advantage. Against right-handed batters, Civale has given up 53 hits over 53.1 innings. Against lefties, on the other hand, he’s given up 40 hits, seven home runs, 13 walks, and struck out 52 batters over 43 innings of action.

His struggles against left-handed hitting suggest that the Yankees might want to utilize one of their secret weapons, Matt Carpenter. Carpenter is coming off an incredible resurgent 2022 campaign, hitting .305 with a 41.2% on-base rate, including 15 homers and 37 RBIs across 47 games.

The Yankees need to take advantage of Civale:

Specifically, against right-handed pitching, Carpenter hit .295 with 10 homers and 21 RBIs over 95 at-bats, showcasing incredible slugging prowess. There’s a strong argument to make that Carpenter should be injected into the game early against Civale, getting a few at-bats before swapping back in Giancarlo Stanton or another player.

It appears that manager Aaron Boone would like to keep Stanton out of the outfield until the ALCS at the very earliest, potentially utilizing him as a designated hitter for the entire postseason if possible. Stanton‘s health is a fickle thing, and he’s dealt with a myriad of injuries this season that have kept him out for quite some time.

Any small tweak or degradation in health could impact the Yankees’ chances at a World Series appearance significantly, let alone winning Game 5 of the ALDS.

However, they also need to consider matchups and increasing the probability of winning. Carpenter makes the Yankees’ offense more potent, especially against a bad right-handed pitcher in the Civale.

If there’s a way to get Carpenter involved, Boone must consider doing it. The analytics suggest it’s the right move.