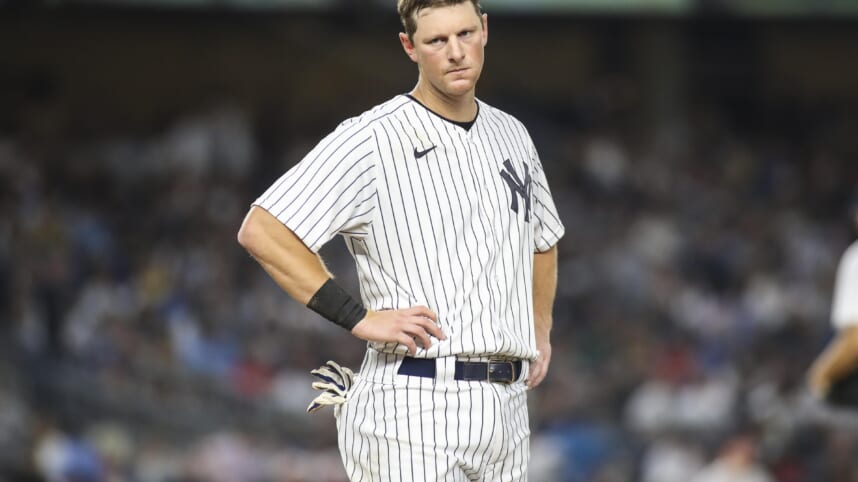 The New York Yankees are getting healthier with every passing day, and while they did fall to the Toronto Blue Jays on Monday night, they won seven consecutive games prior to that.

The expectation is that utility man DJ LeMahieu will be making a return within the next few days, recovering from a big right-toe injury. The issue isn’t expected to fully dissipate, but DJ is preparing and gearing up for the home stretch.

The team needs LeMahieu during the playoffs, especially with his ability to get on base and provide Aaron Judge with an opportunity to bat more runners in.

“I don’t think at this point it’s really going to go away,” he said of his condition last week. “It’s just, stay ready and let them know how I feel. I’ll be ready to go whenever that day is.”

Manager Aaron Boone spoke about DJ’s injury prior to Monday’s game, indicating he will hit on Tuesday and start to ramp up at a more serious rate. As long as the Yankees are winning games, they can afford to give him as much time as possible to heal prior to the start of the playoffs.

The Yankees have an interesting decision to make with DJ LeMahieu in the infield:

Normally, LeMahieu would simply slide in at any position going through adversity or give essential rest days. However, the infield has looked far better as of late, with Gleyber Torres having an electric September.

Torres hasn’t only hit incredibly well, recording a .305 average with a 38.3% on-base rate, including 25 hits and six homers over 82 at-bats this month, but he’s also produced fantastic defensive metrics.

There is no reason to believe that Torres will be taken out of the infield once DJ returns. Looking over at shortstop, Isiah Kiner-Falefa has been far more effective this month as well, hitting .286 with a 36% on-base rate, including three homers and 10 RBIs. Of course, LeMahieu isn’t known for his short-stop qualities, so IKF has that position locked up.

First base is manned by Anthony Rizzo, who is hitting .241 with a 33.3% on-base rate, including two homers since returning on September 18. Rizzo is the Yankees’ everyday first baseman, and that isn’t about the change, but that leaves one spot LeMahieu could find himself playing more frequently.

The Yankees need to find a spot for DJ to play regardless, so the hot corner makes the most sense, despite Josh Donaldson looking a bit more comfortable in the batter’s box lately. Donaldson is hitting .246 with a 33.3% on-base rate in September, including three homers and nine RBIs. Defensively, he’s been stout all season long, but his polarizing offensive production leaves the door open for LeMahieu to steal some reps.

Figuring out who to start during the playoffs is the more intriguing question, but the Yankees can deploy LeMahieu as they normally do in the meantime, mitigating fatigue and multiple positions to keep everybody healthy for October.

However, with Giancarlo Stanton locked into the designated hitter role, it will be interesting to see how they get LeMahieu involved, especially if the entire infield is performing well.