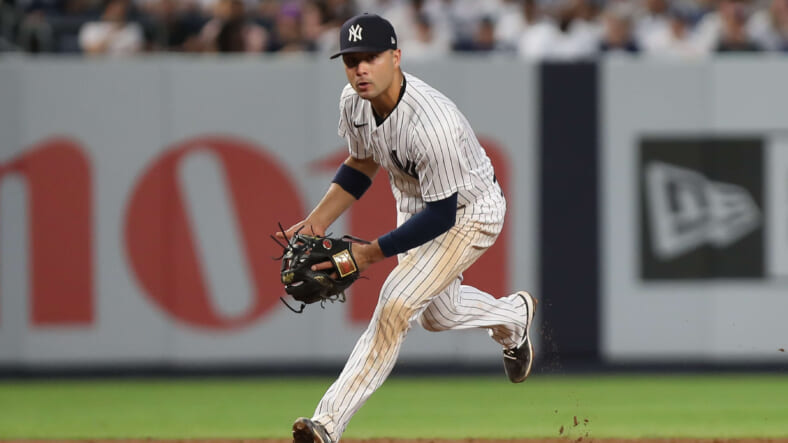 The New York Yankees have already made one big decision regarding Isiah Kiner-Falefa, tendering him on a one-year, $6 million deal over the weekend. There were rumors that the Yankees could non-tender IKF, which would make him a free agent and allow him to sign with another team, but general manager Brian Cashman clearly saw value in retaining him for the 2023 season.

Nonetheless, now we have to consider what his role will be, especially since Oswald Peraza projects to be the starting shortstop, and the team still has Josh Donaldson on the roster and his $21 million salary. Paying $6 million for an infielder who can only play third base and shortstop is a bit pricey, especially since he hosted an 85 wRC+ this past season, indicating he was 15% worse than the average MLB player.

Realistically, Kiner-Falefa won’t land himself a starting gig for the Yankees next season, with Peraza and Anthony Volpe expected to compete in a position battle for the starting shortstop job. It is possible that IKF could slide in at third base, a position he won a Gold Glove at several years ago. He’s featured in 967 innings on the hot corner, recording a .960 fielding percentage, including 13 errors.

There’s a strong argument to make that DJ LeMahieu should play third base instead of IKF if manager Aaron Boone has to make a decision there. The goal is to offload Donaldson‘s deal, which is easier said than done, given the baggage he contains and the cost of his salary. The likelihood is that Cashman has to consume a bit of his contract just to offload him and save pennies on the dollar to reallocate.

The difficult decision with IKF is whether or not to try and trade him this off-season. Cashman now has the leverage of waiting patiently for the top infielders to sign, which will inevitably leave a team in need of a decent player with upside. Seemingly, Isiah couldn’t handle the pressure of playing in New York, similar to Joey Gallo and Sonny Gray. Sending him to a low-pressure team may do him well.

The question is, does Kiner-Falefa have any tangible value on the trade market? Realistically, the Yankees may be able to get back a fringe prospect or struggling bullpen arm in exchange. It is not as if IKF can’t feature as an everyday shortstop, he just seems to commit too many routine errors, which simply isn’t a sustainable variable during the playoffs, given they benched him against Cleveland Guardians in the ALDS.

If Volpe eventually makes the jump to the top team, the Yankees could simply utilize IKF as a stopgap. Volpe would likely take over a second base, given the team trades Gleyber Torres, which would shift LeMahieu over to the hot corner. The team may need a bit of support there, which is a role that the 27-year-old infielder could play, but they would preferably avoid him serving as an everyday option.

Nonetheless, Cashman bought himself a bit of time to figure out what he wants to do with IKF, who has fallen out of favor with the fan base after a tumultuous post-season.