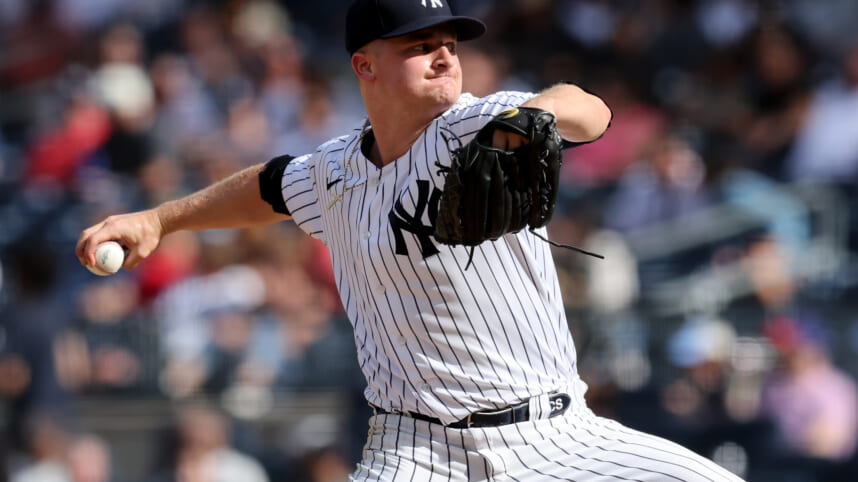 The New York Yankees‘ starting pitching has been solid the past few days, but the bullpen has run into a few roadblocks. Notably, on Monday night against the Tampa Bay Rays, Wandy Peralta and Lou Trivino struggled to mitigate production with a tied game at 0-0.

Despite some hardships, the bullpen has been a bit more efficient along with the starting rotation. The Yankees’ offense has been the primary catalyst for failure, which wasn’t expected given the star-studded lineup they have on paper.

The Yankees have been ignoring stud bullpen arm Clarke Schmidt after sending him back down to Triple-A Scranton. The 26-year-old was shoving before his demotion, but the Yankees simply wanted to use his minor-league options to test out a few more players.

In the meantime, Schmidt has been absolutely electric with Scranton Wilkes-Barre, posting a 2.86 ERA with 12.39 strikeouts per nine, a 50% ground ball rate and 68.8% left on base rate over 28.1 innings.

Looking at his individual pitch metrics, Schmidt utilizes a slider, sinker, 4-seam fastball, and curveball as his primary sequence. Schmidt’s slider is generating a .118 batting average against with a 46% whiff rate and 28.6% put-away rate. His sinker is generating a .286 batting average, showcasing a significant margin in efficiency. Throwing his slider at 33.7%, Schmidt generates 68% more horizontal movement than the average pitcher, which is why his slider is so dominant.

If he can hone in on his sinker and provide a bit more efficiency with his fastballs in general, he could turn into one of the Yankees’ top bullpen options in the future. For now, they needed to make room for Lou Trivino and Scott Effross, who were both acquired at the trade deadline.

The Yankees could use Schmidt as a spot-starter:

There’s also an argument to make that Schmidt could be a spot starter for the Yankees to mitigate fatigue down the stretch. He’s earned a few starts with Scranton this season but has otherwise worked out of the bullpen. He has the stamina and longevity to feature in that role, but keeping him fresh and confident seems to be the Yankees’ strategy.

It is strange the Bombers haven’t kept him around the major-league squad given his numbers this season, but they may have a bigger plan in mind for his services in the coming weeks.