The Yankees have a huge outfield problem after latest injury 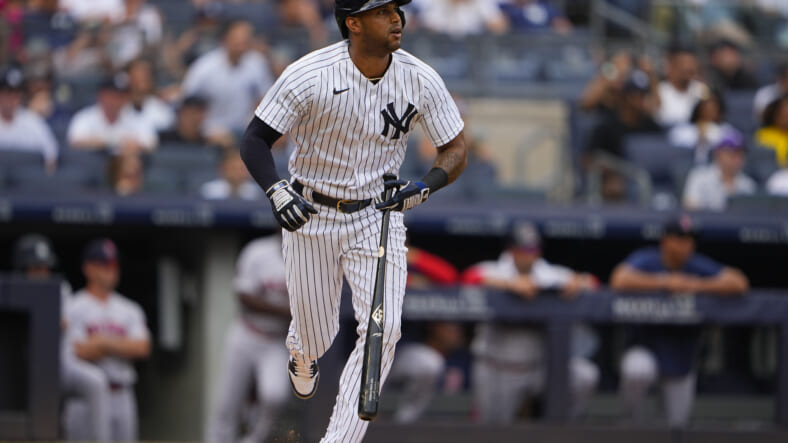 At a time when the New York Yankees need to be getting healthier, they seemingly continue to get injured. Over the weekend, starting left fielder and trade acquisition Andrew Benintendi suffered a broken wrist bone, an injury that will require surgery and keep him out for a number of weeks. It is possible that Benintendi misses the rest of the season if he’s unable to recover in time for the playoffs, leaving another gaping hole in the outfield.

Losing Benintendi once again provides struggling outfielder Aaron Hicks with more opportunities to start on an every day basis. The Yankees are waiting on Harrison Bader to make a return from the injured list, dealing with planter fasciitis over the past few weeks, but he’s still a week away from participating in rehab games.

Before going down, Benintendi was hitting .246 with a 32.3% on base rate and 19.1% strikeout rate with the Yankees. His numbers deteriorated significantly since joining from the Kansas City Royals, but he was still contributing at a significant clip, especially over the past three weeks or so.

In his stead, Hicks takes over as the primary leftfielder until Bader can feature in center, pushing Aaron Judge back to right field and putting Cabrera in left. Over 10 at-bats in the month of September, Hicks is hitting .100 with an 18.2% on base rate. He’s recorded one hit, one walk, and two strikeouts.

In the month of August, Hicks was virtually useless, hitting .137 with a 22.4% on base rate, including seven hits and 15 strikeouts over 51 at-bats.

Every game that Hicks spends in left field is another the Yankees have an automatic out in the batting order. He’s been unable to contribute much offensively this season, hosting a .217 average with a 33.6% on-base rate over 109 games. He’s only tallied six homers this year with 33 RBIs, striking out at 22.3% with a 14.5% walk rate. He has a 90 wRC+, indicating he’s 10% worse than the average player. This is not the same Aaron Hicks we experienced back in 2017, who hit double-digit homers until the 2019 season.

The expectation is that Cabrera will feature in right field for the time being, but he’s also struggling to get acclimated to the MLB offensively. He’s earned a .211 BA with a 25% on-base rate but does feature six defensive runs saved above average, spending nine games in right field with a perfect fielding percentage.

The return of Bader will offer the Yankees a tremendous defensive threat, but he was struggling offensively before suffering the foot injury. Bader only has a 30.8% on base rate this year, 3% less than Hicks. His batting average is better , but he’s not going to offer the offensive spark the Yankees desperately need.

Once on base, though, Bader is capable of stealing with ease. He’s matched his career high of 15 stolen bases in just 72 games this year, which should provide value at the bottom of the order. If Bader can get on base as the 8 or 9 hitter, giving Aaron Judge an opportunity to bat him in, there could be value there.

In the meantime, the Bombers face a serious issue in the outfield, but that isn’t the only downfall the team has experienced lately. The degradation of the infield has also been prominent, especially with Isiah Kiner-Falefa struggling to manage routine ground balls at shortstop and injuries hitting Anthony Rizzo over the past few days.