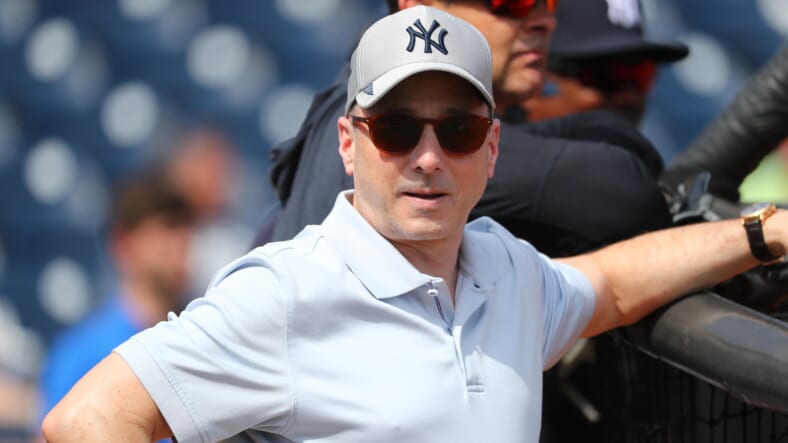 The New York Yankees may be turning their attention to Aaron Judge and his contract extension, but the future of one other prominent figure also hangs in the balance. Aside from Judge, general manager Brian Cashman is also watching his contract expire without a new deal.

There are expectations that the Yankees will retain Cashman, who is enjoyed plenty of seasons above .500 and playoff appearances, but reaching the World Series has become a problem.

The 2022 season didn’t pan out exactly how most hoped, and many point fingers at Cashman and manager Aaron Boone. The Yankees’ GM made a flurry of moves before the season begin, notably the acquisitions of Josh Donaldson and Isiah Kiner-Falefa. Both players underwhelmed during the regular and post-seasons. However, he did also find a gem in José Treviño, who is arguably the best defensive catcher in baseball this year.

The Yankees struck out at the trade deadline:

At the trade deadline, Cashman looked to make a few roster-bolstering moves to help their playoff chances. He acquired Andrew Benintendi from the Kansas City Royals, Frankie Montas, Scott Effross, and Harrison Bader.

Unfortunately, several injuries hurt the expectations he put forth for his acquisitions. Montas suffered a shoulder injury, Benintendi went down with a wrist issue, and Effross required Tommy John surgery. Only Bader made a significant impact during the postseason, which may end up letting Cashman off the hook from the perspective of owner Hal Steinbrenner.

According to Andy Martino of SNY, the Yankees will likely retain Brian Cashman, but there is one scenario where things could go south:

Cashman’s contract is up, of course, and most in the organization believe that Hal Steinbrenner will ask him back, and that Cashman will accept. If Cashman returns, Boone — finishing up the first year of three in his current deal — is expected to come back, too.

Unless the fans create a hostile environment for Cashman and force Steinbrenner’s hand, things will likely remain the same. While there is plenty of criticism on social media regarding the Yankees’ general manager, it’s nothing ownership hasn’t seen in the past after a losing season.

The only way it seems that this could go sideways for either of them is if fan vitriol becomes so toxic that Steinbrenner decides he must initiate a GM change that no one believes he wants to make.

Given the fact the Yankees are a perennial playoff team, they may want to keep it that way in hopes of everything coming together in the future. Changing things up now is a risk, but sometimes you have to make the leap if you want the reward.