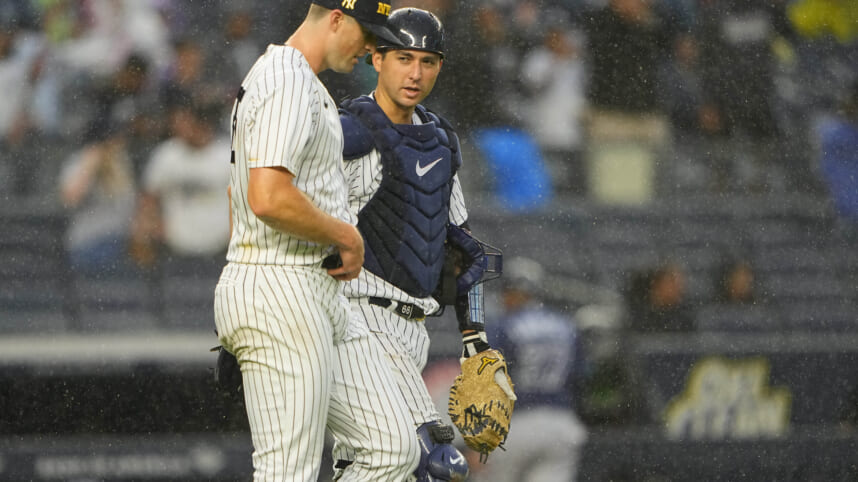 The New York Yankees are facing a few mediums of adversity as we approach the postseason. Blowing a win against the Milwaukee Brewers wasn’t exactly how manager Aaron Boone planned to start the series before heading back to the Bronx against the Pittsburgh Pirates.

However, aside from a poor performance from Frankie Montas, which seems to be adding up at an inconceivable rate, the Yankees should also be worried about star closer Clay Holmes. The “star” coinage is quickly fading.

The deterioration of Clay Holmes is bad for the Yankees:

Holmes looked like one of the best closers in baseball the first half of the year, but his stuff has degraded quickly over the past few weeks. He currently features an impressive 2.59 ERA and 2.84 xFIP with 9.46 strikeouts per nine and a 73% left on-base rate on the season, but his month-by-month stats are alarming.

His August and September numbers are quite disappointing, presenting a potential issue for the Bombers in the playoffs when they need him most. In August, Holmes made six appearances totaling 5.1 innings, giving up four earned runs and a 6.75 ERA.

In fact, he featured a 7.00 ERA in July over 9.0 innings, and while September is a bit more efficient, he’s given up an earned run in three consecutive appearances.

This month over an 8.0 inning sample size, he’s tossed 132 pitches, generating 13 ground balls and four earned runs to go with a 4.50 ERA. To be frank, Holmes’ stuff simply looks off, not pitching with conviction and confidence, but rather throwing too many balls and failing to be aggressive.

His once lethal sinker is generating a .318 batting average this month with a .500 slugging rate and just an 11.8% whiff rate. Looking back at June, his sinker was producing a 30.8% whiff rate, meaning batters are simply making more contact which is problematic.

The spin rate isn’t a problem, still showcasing great numbers in that category, but his location seems to be off, and professional hitters are simply catching up. The difference in exit velocity regarding his sinker is astronomical, giving up an 85.3 mph EV two months ago, which has bubbled to 91.9 mph this month.

Holmes is specifically a heavy sinker/slider pitcher, but has seen a heavy increase in slider usage to 38.6% this month from 9.8% back in July. In July, he tossed his sinker 90.2% of the time, which has dropped to 61.4% this month, meaning pitching coach Matt Blake is heavily adjusting his sequence.

His slider has produced far better results with a .111 batting average against and 33.3% whiff rate, but the degradation of his sinker is simply unsustainable for a pitcher that needs to be at the top of his game. Luckily, the Yankees have Aroldis Chapman returning from a leg infection, but there’s no telling what version they will get.

I wouldn’t be surprised to see Wandy Peralta get more opportunities to close games moving forward, especially since he’s come through big this year. Over 6.2 innings, he hasn’t given up a run this month and allowed just two hits. Given Peralta has been a bit more consistent over the course of the season, the Yankees may look in his direction to help out in high-leverage situations, especially if Holmes continues to struggle.