The Yankees have a brand new outfield combination 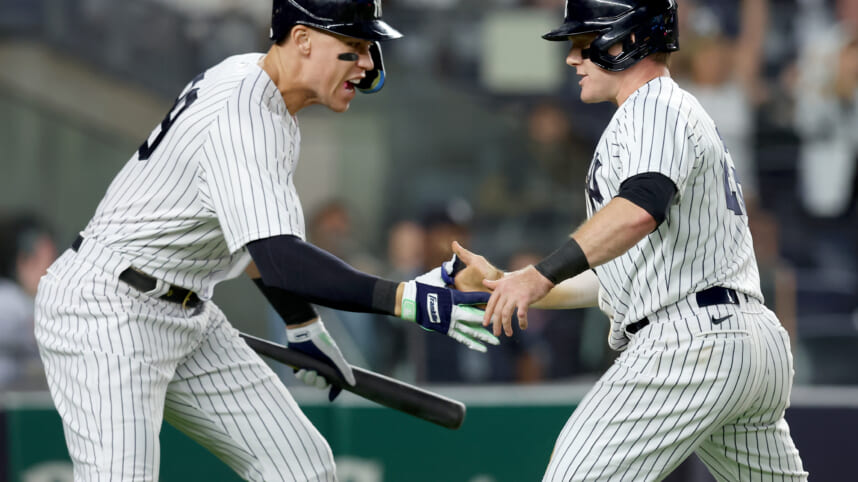 The New York Yankees mounted a historical comeback against the Pittsburgh Pirates on Tuesday evening, scoring five runs in the bottom of the 9th inning, courtesy of Aaron Judge’s 60th homer and a Giancarlo Stanton Grand Slam.

However, the win was a team effort, sparked by the Yankees’ new outfield combination. Harrison Bader finally joined the team after a lengthy spell on the injured list due to plantar fasciitis. In his first game back, he made an immediate impact, helping to spark the Yankees’ offense.

The Yankees have moved Aaron Judge back to right field after spending 618.2 innings in center. He recorded a perfect fielding percentage, including 159 put-outs and 3.6 outfield arm runs above average. However, Judge’s most prolific position is right field, playing just 424 innings there this season after the team acquired Andrew Benintendi and the excellent defensive play of Oswaldo Cabrera.

Judge is well on his way to winning the MVP award this season, currently leading the league in home runs, RBIs, and batting average, otherwise known as the Triple Crown. He features a .316 average with a 42% on-base rate, 60 homers, 128 RBIs, and 16 stolen bases. We may not see another season like this in our lifetimes, so soak it all in over the next 15 regular season games.

In Tuesday’s win, Bader made an immediate impact, recording three RBIs and two hits across four at-bats. He also scored a run, elevating his average to .260 on the season with a 30.6% on-base rate. After striking out in his first at bat, Bader settled in and started to drive runners in with ease. His fantastic defensive qualities were also on display, tracking a tough fly ball in the outfield.

Having an elite centerfielder will do wonders for the Yankees’ defense, but he showcased his offensive qualities on Tuesday, which is what everybody was waiting for.

If Bader can ramp up down the stretch and offer consistent production on both sides of the ball, the Yankees will be in good shape heading into the playoffs.

Of course, Aaron Boone didn’t want to take Oswaldo Cabrera out of the lineup, transitioning him to left field instead of giving Aaron Hicks more reps.

Cabrera looks reliable at his new position, having no problems tracking down fly balls and getting his throws in adequately. Cabrera tallied two runs in the win on Tuesday, walking once and striking out twice. He features a .221 average this season with a 28.7% on-base rate, but he’s been far more effective over the past few games.

In fact, over his last seven games, Cabrera is hitting .333 with a 47.8% on-base rate, including one homer and two RBIs.

If Oswaldo ramps up his offensive production down the stretch, getting on base routinely, he may just warrant a spot on the playoff roster if Andrew Benintendi isn’t ready to return following wrist surgery.