The Yankees can’t write off Deivi García in 2023 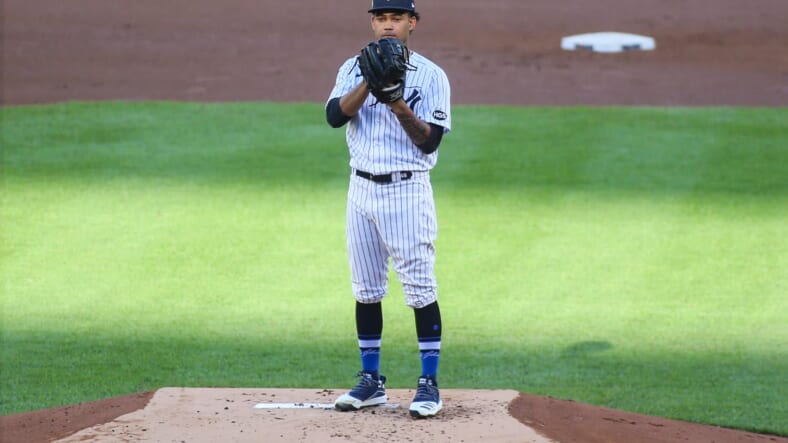 Baseball has always been a game that pushes even the most mentally strong to their breaking point. A game built to set up players to fail, we forget how hard it is to progress in this great game. Deivi García took the mound on August 30th, 2020, against the New York Mets as the Yankees needed to plunge into their farm system to get innings that season.

The Yankees sported a 4.35 ERA as a pitching staff, a mark that ranked 14th in all of baseball. For a team that had just signed Gerrit Cole and had an impeccable bullpen coming into 2020, it was impossible to imagine they weren’t going to pitch well. As García stepped onto that mound, he’d put on a show, tossing 6 innings of shutout ball with 0 walks and 6 strikeouts. Through his first 4 starts, he put up extremely encouraging numbers, and he uplifted this struggling Yankee staff.

Ever since then, Deivi has stumbled into a period of uncertainty in his career. He hasn’t been the pitcher the Yankees and fans imagined he’d be, but he’s still so young. The rise of new prospects that look to become the face of the franchise alongside (or maybe even in place of) Aaron Judge has caused many to forget about Deivi García, but it’s imperative that we don’t close the book on his story just yet.

The Long Journey To Find His Slider:

The journey of Deivi García’s slider begins in 2020, as we saw Deivi García use his rainbow curveball as his primary breaking ball. The pitch had tons of movement, however, it didn’t perform as well as it should have for a breaking pitch, as batters had a .311 wOBA against his curveball, while the MLB average in 2020 was .274. Breaking balls are thrown not for fun but because they are objectively better pitches than fastballs.

They generate more whiffs, lower batting averages, lower slugging percentages, and are the go-to pitch for 99% of pitchers in strikeout counts. The number of pitchers using their fastballs 50% or more continues to drop, and so in today’s game, a great breaking ball is almost a necessity.

This is Deivi García giving up an absolute moonshot to Red Sox infielder Michael Chavis on a slider. Deivi García threw his slider 9.0% of the time, making it his least-used pitch in 2020. This is a meatball, and it ended up in the streets of Boston. With lower velocity at 82.5 MPH and not a ton of sweep, it’s a poor gyro slider. Gyro sliders emphasize that bullet-like spin, almost as if you’re throwing a football with a perfect spiral. This creates a sharp drop with tight spin that should be around 85-86 MPH, and while not all good pitches are thrown hard, there’s a direct correlation with velocity and breaking ball success.

Deivi García’s slider simply wasn’t up to snuff, and if he wanted to have success against RHB, who crushed him to the tune of a .344 wOBA. wOBA is a metric that is like OBP, except it’s designed to weigh singles, doubles, triples, and home runs accordingly and not just valuing every hit the same, and a .344 wOBA is pretty bad for a pitcher. Deivi was going to need a reliable slider that generated the necessary horizontal sweep that tends to have more success against same-handed hitters, and thus the Yankees and Deivi concocted a plan; develop a sweeper.

Deivi García accomplished the goal of finding a strong slider, and RHB hit just .133 with a .333 SLG against him in his 2 starts at the MLB level. The problem? He registered a 6.48 ERA and 18.1% K% in those two starts, and at the AAA level, he got shelled, posting a 2.08 HR/9 and 6.85 ERA in 90.2 IP. His slider improved, but his command dramatically regressed, and it seemed as if batters just stopped expanding the zone against Deivi García. With the sweeping slider, Deivi García created an issue where his other pitches seemed to not sequence or tunnel well with that slider. Matt Blake discussed this in an article by NJ.com back in September of 2021.

He added a little bit of a sweepier slider, which I think in some regards is good and in other regards, how does it fit into the overall arsenal and what does it do in the second-order effects of the fastball profile or the curveball shape?

Back to the drawing board, it was for the then 22-year-old Dominican native.

Deivi added more depth to his sweeping slider, and it actually profiled better with his Four-Seam Fastball in Spring Training. While Spring Training results are hard to draw any conclusions from, it was encouraging to see him attacking batters with his fastball and throwing strikes reliably. Unfortunately, the MiLB season was not pretty for him. In his first 7 starts, Deivi García wasn’t bad, he was downright putrid.

He hit the IL in after a start on May 26th, and when he returned, the Yankees optioned him to Double-A. He had a 5.40 ERA in 6 starts there, but he also struck out 32.2% of batters with just a 7.0% walk rate. When you see a dramatic increase in K-BB%, that’s when you know there’s tangible progress to sink your teeth into. He was promoted to Triple-A to fill in as a reliever, and the trend of a high ERA but strong K-BB rates continued, as he had a 4.60 ERA and maintained a 20.6% K-BB%. It’s not exactly what you want, but progress is progress. One thing is for certain, though, Deivi García went from a pitcher who didn’t have great stuff or great command to one that has great stuff and just needs to put the command aspect of it together.

An Upward Trend in His Stuff:

In 2021 Deivi García registered just a 86.8 Stuff+. Stuff+ is a metric that looks at velocity, movement, spin rates, among other variables (including how it plays off your fastball!), and 100 is considered “average.” This means an 86.8 dictates that Deivi García’s stuff was 13.2% worse than average, however, we saw Deivi García add serious mileage to his fastball alongside the re-worked slider in Spring Training, and his Stuff+ shot way up. At a 107.2, Deivi García displayed that his stuff was 7.2% better than league average, which is a really strong mark. We saw his velocity climb even more out of the bullpen for the Scranton Railriders at Triple-A, with some 97-98 MPH fastballs reported.

Velocity is important because again, velocity correlates with success for pitchers at the professional level. While movement and command matter, velocity is the equalizer that can allow pitchers to get away with mistakes more often.

We see that higher velocities generate lower wOBAs, while lower velocities are grouped farther along the wOBA line, meaning batters have more success. With how important velocity is, you’d think that because Deivi García is throwing harder, he should just throw more fastballs, but that’s not always the case. Let’s take a loot at the three main pitch groups and see how the league does against them:

The league has adjusted to these trends of fastballs being worse than other pitches by throwing fewer fastballs, and I believe Deivi García should follow that trend. This can be further emphasized in a reliever role, which I believe Deivi García could end up in. Eno Sarris of The Athletic is the creator of Stuff+, and the trend he’s noticed with his model is that one of the easiest ways to improve your Stuff+ is by changing your pitch selection. For many pitchers, that means figuring out what your best pitches are and leaning on them more in games.

If you generate a swing like this on a slider, don’t throw anything else; you simply don’t need to. Throwing your best pitch more seems obvious, but it’s something that also takes great command and the right mindset. For Deivi García, he struggled with having the confidence to just go out and attack hitters, so perhaps there is added emphasis on his fastball is because he’s trying to be aggressive in counts. The counterargument to this is that walking a batter occasionally isn’t as bad as giving up a HR.

Deivi García still struggles mightily with preventing the longball, as in 2022, even after returning from injury, he had a 1.70 HR/9. The answer to this is somewhere in the middle, which is usually the answer to most questions. Being aggressive enough to pound the strike zone while also knowing to live to throw another pitch takes experience and a veteran mindset. How Deivi Garcia adapts to finding this balance is ultimately going to be the deciding factor in just how productive he is at the MLB level for the Yankees.

Nestor Cortes, at age 25, held a career 6.72 ERA, 10.3% BB%, and 2.73 HR/9. Released by the Yankees after 2019, he went to Seattle, where he tinkered with things but ultimately got crushed to the tune of a 15.26 ERA. The key difference is that Cortes was finding a ton of success at Triple-A, unlike Deivi García, but nevertheless, they both struggled in similar ways at the MLB level. I want to clarify that Nestor Cortes is an anomaly; pitchers do not typically begin running an ERA of 2.61 after being downright terrible to start their career. That being said, Nestor Cortes found himself after developing a cutter that served as the bridge between his fastball and slider and ultimately saved his career. This isn’t to say Deivi García should just a cutter (though that could be an experiment worth exploring), rather that sometimes it’s just one adjustment that can “solve” a pitcher.

Just like Nestor Cortes coming into 2021, Deivi García walks into 2023 uncertain about his future with the New York Yankees. He’ll be asked to be versatile as a starter and reliever, and it’s up to him to perform well enough to get MLB innings during the season. He’ll be pitching in the LIDOM (Liga de Béisbol Profesional de la República Dominicana) over the winter, and hopefully, those innings and reps will give Deivi García comfort with his stuff.

Progress is not linear, and just like with life, baseball is full of ups and downs that make us question why we continue to push forward. For Deivi García, he’s been written off and considered an afterthought by the very people who predicted he’d be a future star not too long ago. While I can’t be certain that Deivi García will even survive the 40-man crunch, I can say that Deivi García has a chance to be better than he’s ever been in 2023.