Yankees call up red-hot prospect looking for an offensive spark 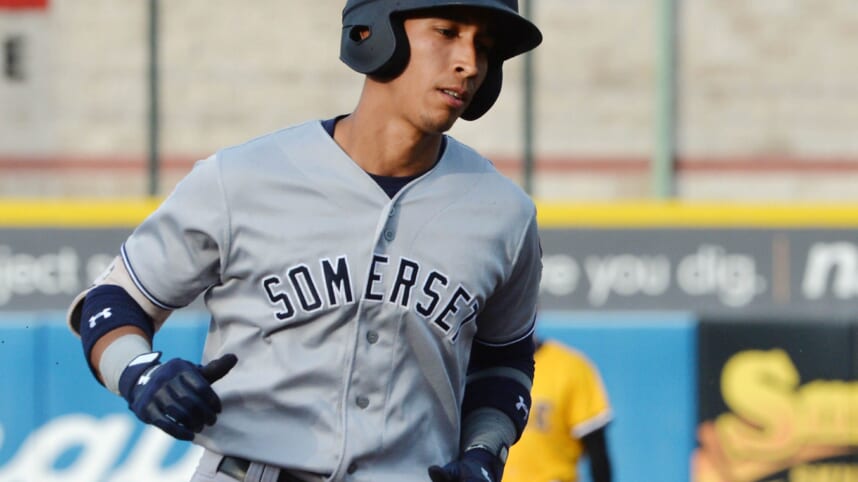 The Yankees have been searching for a spark, and they’re being extremely aggressive about it. News broke that Estevan Florial is expected to be called up, but he’s not the only rookie on the way. Oswaldo Cabrera has provided the Scranton/Wilkes-Barre RailRiders a huge spark in the lineup while also being slick with the glove at a multitude of positions. With the Yankees in an offensive slump, they’ve opted to tap into their AAA depth to try to find lightning in a bottle. Whether it works or not remains to be seen, but let’s delve into what should excite Yankee fans about the Venezuelan stud that is Oswaldo Cabrera.

In the month of August, the Yankees have mustered a subpar .654 OPS and have gone 2-11. They’ve specifically struggled at 2B/3B/SS, as they’ve slashed just .236/.315/.340 with a 92 wRC+ in August before last night’s embarrassing, offensive display. Oswaldo Cabrera has posted strong numbers at AAA across 55 games:

This level of offensive production is absolutely jaw-dropping, as Cabrera’s put on an impressive power display while also hitting for average, working walks, and stealing quite a few bags. He’s been red-hot since return for injury, with an OPS well over 1.000 in that timespan, and as a switch-hitter, Cabrera can have the platoon advantage against any pitcher, though most of his production comes from the left-side of the plate. Cabrera’s got a small stature, but by generating a lot of pull-side power, he’s able to generate above-average power. He also has a knack for not chasing out of the strike zone much, which helps create a well-rounded hitter. I’m not sure how much of that translates at the MLB level or if he will maybe benefit from getting more pulled flyballs down the LF and RF line to go for HRs, but the production and tools are there for offensive success.

The Yankees are a strong team defensively, but with the struggles of Isiah Kiner-Falefa to make routine plays (even though he’s made absolute sparklers), maybe Cabrera can shore the Yankees up defensively there. According to Clay Davenport’s defensive grading system, he provides a +1 at the SS position, making him an above-average defender. At 2B, he’s at a +5, which is extremely impressive, leading me to believe it could be an arm not range deficiency that may hold Cabrera back if he were to become a full-time SS.

This is further supported by Baseball Prospectus, which grades Cabrera’s arm at SS as a -0.1 compared to the 1.8 at 2B this season. Cabrera’s true value comes in how many positions he can play, with the ability to hold his own at 2B, SS, 3B, LF, and RF. His athleticism and average arm means he can provide enough value at a multitude of positions to justify starting him there. He won’t be winning any Gold Gloves, but if he can be a 1-2 DRS guy at a variety of positions, he has more defensive value than a 3- 4 DRS player at just one position.

What Should the Yankees Expect from Oswaldo Cabrera?

As a projection-sheep, I must look to the trusty Steamer projections to give you what his slashline and wRC+ look like:

They project Oswaldo Cabrera to be a roughly league average bat, and if his defense and base running are as good as they’ve been at the MiLB level (which should translate seamlessly), then he is going to immediately be an impactful UTL bat for the Yankees who can put the ball in the seats every now and then and pinch-run and swipe a bag here or there.

Prospects are extremely volatile, and the Yankees don’t have a large sample of season left to give Cabrera a great chance to prove himself, but if he can stay hot (slashing .400/.457/.600 in August), he could be the spark the Yankees need in their infield. There is also a chance he runs a K% over 30%, has an OPS under .600, and isn’t the spark the Yankees were looking for. That does not mean boo the kid or label him a bust, it just means it didn’t work out this season. He just turned 23, this is his first taste of MLB action, and if this doesn’t work out, then you just hope Stanton/Bader/LeMahieu/Carpenter come back a 100%. Cabrera isn’t here to “save the season”, he’s here to give the team some much-needed new looks. He’s here to put pressure on the veterans to start, to run the bases, play strong defense, and maybe, just maybe, find his stride at the dish and have some big hits.

I couldn’t be more excited to watch Oswaldo Cabrera play, and hopefully, this is a start of a strong career for the Venezuelan rookie.