Yankees to call up Estevan Florial as they search for answers 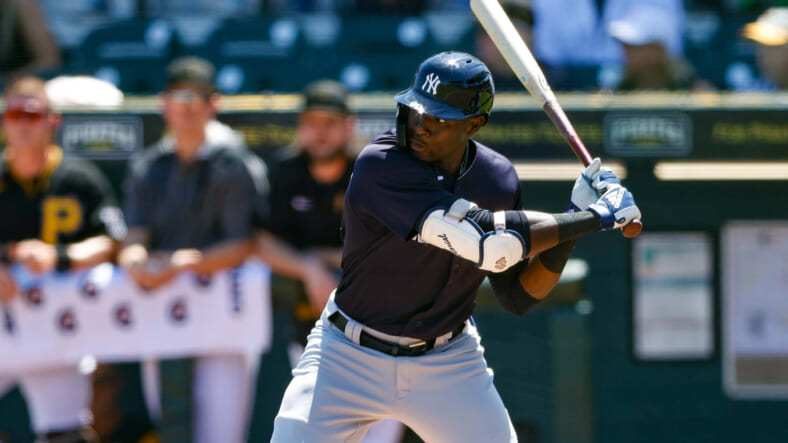 The New York Yankees are atrocious right now. They are abysmal, they are terrible, they are really any adjective that you can think of that can reflect playing horrible baseball. The Yanks lost again this evening 3-1 to the Tampa Bay Rays.

A loss that sealed the fifth straight series defeat by the Yankees. Since having a nine-run outburst in a win against Seattle last week, the Yankees have scored just eight runs in their last seven games. In that stretch they’ve been shut out three times while averaging 1.14 runs a game.

Shockingly the Yankees record reflects that having gone 1-6 in those seven games. Things are bad for New York right now. Honestly, this is the worst it’s been in a long time. Does it feel that drastic because of how they started the season? Perhaps.

However, nothing can excuse the terrible play. I mean what kind of excuse can you offer going 2-12 in your last fourteen games. Joey Gallo took the brunt of Yankees’ fans frustrations the first half of the season. While there are plenty of new targets to choose from, the fans have zeroed in on one player in particular.

That player is Aaron Hicks.

This article is sounding so negative and I sound repetitive, but I truly cannot think of a world to describe how awful Aaron Hicks is. Last night, he had one of the worst games I’ve ever seen a player have in my years of watching the Yankees.

Hicks took an awful route to a routine fly ball that led directly to a run. The only run that Gerrit Cole would allow. Then, with the bases loaded and one out, Hicks hit a dribbler back to the pitcher for an inning-ending double play.

Fans have called for Hicks to be benched for some time, but the Yankees have given him a long leash. Perhaps it’s Brian Cashman’s ego talking here after giving Hicks a horrendous seven-year deal a while back. Nevertheless, last night’s game might have been the straw that broke the camel’s back.

Bob Klapisch reported this evening that the Yankees are planning on calling up Estevan Florial from Triple-A tomorrow which will likely send Hicks to the bench for the foreseeable future. Florial is having a very solid year at Scranton batting .284 while hitting 14 homers and swiping 32 bags.

Florial will provide fresh energy, speed, and a helluva upgrade in center defensively. While I’m excited to see Florial get the call, will that fix things?

In my opinion, more changes need to be made. If I was running things, I would bring up Oswald Peraza now. You cannot look at me with a straight face and tell me the Yankees wouldn’t be better with Oswald Peraza in the lineup every single day.

We are talking about a team that is forcing fans to watch the likes of Josh Donaldson batting cleanup and Gleyber Torres leading off. I’m not going to be too hard on IKF here, but most fans have let it be known what they think of him.

Ron Marinaccio is expected to be called up as well with news coming out tonight that Yankees closer Clay Holmes is likely going on the IL with a back issue. Marinaccio shouldn’t have been sent down in the first place.

Bottom line, the Yankees need to make serious changes and they need something fresh. Hell, most fans would probably prefer the Triple-A team playing MLB games at this point just with Judge in right. While that obviously sounds extreme, ask yourself, could it be worse?