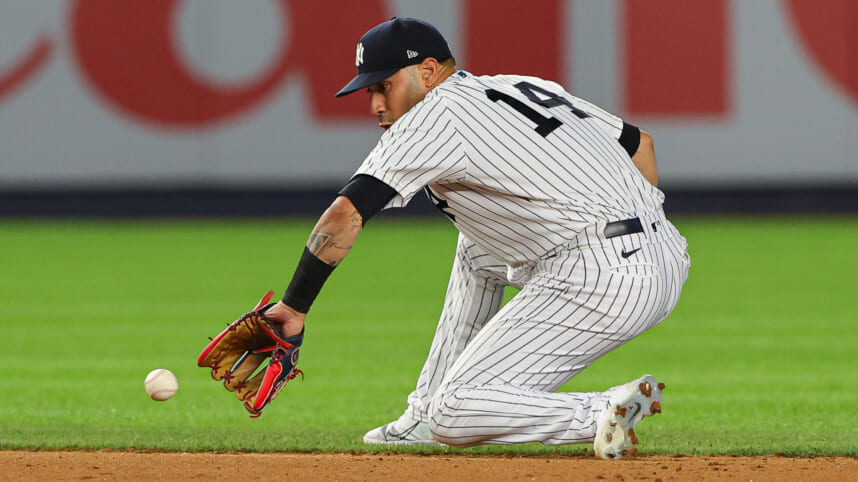 Sometimes the New York Yankees make decisions that seem to hold little logic. For example, why exactly has manager Aaron Boone kept Marwin Gonzales on the team for this long?

Gonzalez has provided next to no value on the team up to this point, despite having about 11 years of MLB experience under his belt. The last time Gonzalez provided adequate value was back in 2017 with the Houston Astros when he hit .303 with a 37% on-base rate over 134 games. He hit 23 homers that season with 90 RBIs, but he’s fallen off significantly since then.

The Yankees have gotten minor-league value from Marwin:

This season, Gonzalez features a .200 average with a 27.1% on-base rate, including three homers, 11 RBIs, and a 26% strikeout rate. While he offers solid defense, providing a 2.7 defensive WAR, he still hosts a 72 wRC+, indicating he’s 20% worse than the average MLB player.

There is a strong argument to make that Gonzalez is simply taking up a roster spot for no reason. The Yankees could easily call up Oswald Peraza, give him reps at shortstop over Isiah Kiner-Falefa, and move on from Gonzalez once and for all.

In fact, the 33-year-old utilityman hasn’t recorded a hit in the month of August and recorded two in July. The last time he tallied a hit was back on July 6 against the Pittsburgh Pirates in a 16–0 win.

Given those abysmal offensive numbers, what reason did the Yankees have to continue offering him a roster spot when Peraza is completely dominating on the Triple-A Scranton team?

In August, Peraza hit .266 with a 34% on base rate, four homers, and 10 RBIs over 79 at-bats. At the very least, they should give him defensive reps to test his capabilities at the next level. After August 18, the Yankees were able to promote prospects to the Major League team without accruing any service time, which is exactly what they did with Oswaldo Cabrera.

Management has made some strange decisions this season, but relying on Gonzalez to provide absolutely nothing on offense is another drop in the bucket. Gonzalez is currently on paternity leave, offering the Yankees another roster spot to work with.

Calling up Peraza isn’t even a necessity, they can simply continue to utilize Cabrera as a multi-position player without ever having to consider deploying Gonzalez. Given the injuries across the starting rotation and bullpen, using that slot for pitching support seems like the most efficient move.