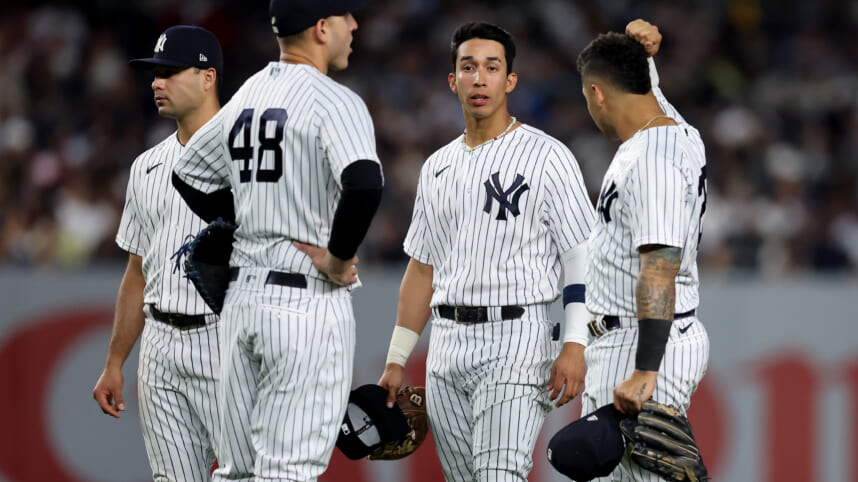 Yesterday evening, Oswaldo Cabrera made his long-awaited debut with the Yankees and was able to soak in the surreal environment. He played third base, giving Donaldson a day off from the field, which may-or-may-not have played a role in him hitting the Grand Slam that sent us all home.

However, tonight, Cabrera shifts over a spot as he gets ready to man short. The switch-handed Cabrera played shortstop and second base primarily this season for Scranton, and this could hopefully be the changing of the guard at that position.

The Yankees have clearly not been too impressed with IKF’s work this season, even if they elect to say otherwise publicly. Last night’s decision to pinch-hit Aaron Hicks for him spoke bounds. If Oswaldo Cabrera is going to be the answer at shortstop, this is the best way to find out.

Cabrera struggled to get anything going in his debut, as he went 0-4 with two strikeouts, but that shouldn’t raise any alarms. The jitters and emotions were clearly running high, but as he collects more at-bats under his belt, there should be no cause for concern.

The Yankees needed a spark, and they got one:

Clearly, a spark was needed, and even if he didn’t directly impact the game offensively, the team fed off the energy of new faces and fresh opportunities.

Donaldson being able to have more off days and more DH days until we have Stanton return (hopefully sometime next week) could be just what he needed. While this season has been a struggle for JD, this month has been a huge shift in his play. This month he has OPS’d .850, to go with a 146 wRC+ and 7 XBH — including last night’s electric walk-off Grand Slam.

Cabrera brings a new jolt of energy, as well as an arsenal of tools in his bag and experience at numerous positions defensively. The Yanks must value his utility role, but if he can take that step and take reps away from IKF, that is a dream scenario that the team would love to have happen.