The latest on the New York Yankees first base situation 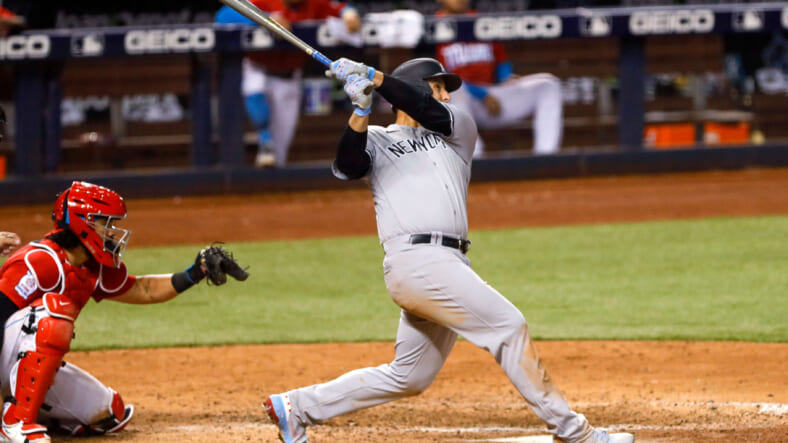 The New York Yankees have had a very slow start to the offseason, much slower than many would’ve expected. Sure, they’ve made a few roster moves, but there have been no free agent signings or big trades thus far.

One major area of need is the shortstop position and that appears to be Brian Cashman’s top priority at the moment. However, there’s another very important infield position that Cashman will also be looking at and that’s first base.

The Yankees currently have Luke Voit, but all expectations are that the bombers are looking to move on from Voit. They tried hard to move him at the trade deadline this year and they have already put him on the block this offseason.

You’ll notice that when scenarios are thrown out about first base with the Yankees, Voit’s name is rarely discussed. So, what is the latest with the Yanks and first base? Well, there are a few options out there at the moment and Cashman is in on all of them.

Yankees First Base Options for 2022

The hottest offseason rumor for the Yankees is the proposed trade with the Oakland Athletics that would net the Yanks All Star Matt Olson. Oakland is looking to shed some salary and with Olson expected to make $12 million next year, they’ve made him available.

The Yankees and A’s have already had dialogue on the potential deal. However, they remain far apart and MLB Network’s Jon Heyman said that the A’s are ‘shooting for the moon’. They should given Olson’s production and the fact that he comes with two years of control.

The Yankees have also met with the representatives of Freddie Freeman. However, this is being looked at as more of a check the box type of meeting than a serious discussion. Nobody in the industry is expecting Freddie Freeman to leave Atlanta.

Then you have Anthony Rizzo. Cashman has already talked about a potential reunion with Rizzo with Rizzo’s agent early in the offseason. Rizzo is said to have really enjoyed his time with the Yankees and he checks a ton of boxes for New York.

However, the latest word is that New York and Rizzo are far apart in a potential deal. With the looming CBA lockout, it’s starting to look more and more like the Yanks aren’t going to do anything major before the lockout which is going to really put them in a time crunch. If a lockout occurs, most expect it to last until February.

The post-lockout timing could create havoc on the market. For free agency and for trades, teams are going to have a very short window to fill a ton of needs. This will drive prices even higher. In my opinion, it would have been much better for the Yankees to take care of some needs before the mad scramble in February.

The idea has been floated that DJ LeMahieu plays first next year, but I just can’t see that happening. I think the Yankees want a left-handed first baseman and I’m convinced that either Matt Olson or Anthony Rizzo will be at first next year. Currently, I’m leaning towards a Rizzo reunion being the most likely outcome.

Sound Off: Who do you want to see at first next year? Let us know in the comments!