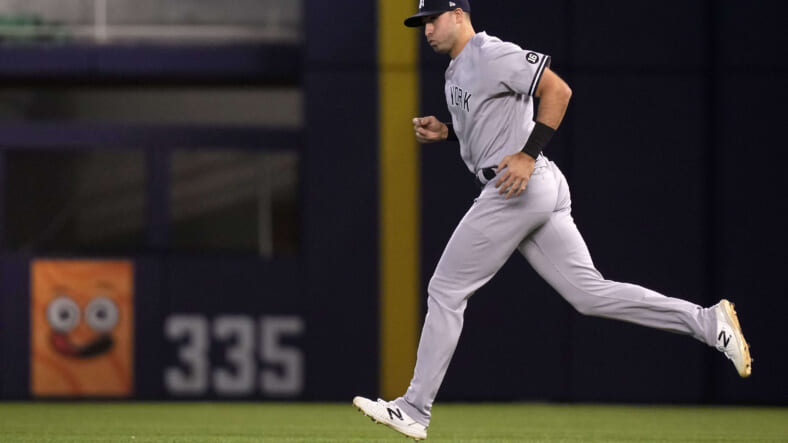 The New York Yankees gave up four prospects to the Texas Rangers in exchange for reliever Joely Rodriguez and the prize of their trade deadline: outfielder Joey Gallo. The hulky slugger is streaky, but is a premier power source, takes lots of walks, is sneaky athletic and boasts a terrific glove.

Gallo is never going to hit .300, but itâ€™s pretty clear he is not performing right now. He only has one hit in his last 25 plate appearances for the Yankees.

Fans are starting to let him know he is not playing well, with boos. However, the left fielder says he is not letting them affect him.

â€œIt is what it is,â€ Gallo told reporters on Tuesday, according to NJ Advance Media. â€œYou play in New York, you understand thatâ€™s going to be part of it. They want a winning product. Itâ€™s just part of the business. Weâ€™re professional baseball players. Youâ€™ve got to go out there and do your job and do it to your best. Itâ€™s not anything Iâ€™m not too upset about or anything.â€

A rough time with the Yankees

Despite the calmness with which he speaks, itâ€™s clear he has been disappointed with his recent performance. He cares.

â€œI mean, obviously, I want play well. Especially coming to a new team. But at the same time, itâ€™s not the first time. Itâ€™s baseball. Youâ€™re going to struggle some times. Obviously working hard to get back to where I know I can be and help the team win. So, itâ€™s frustrating not winning games, but thatâ€™s part of baseball and Iâ€™ve just got to keep working through it and figure it out,â€ he stated.