Should the Yankees start Gerrit Cole or Nestor Cortes in Game 1 of the ALDS? 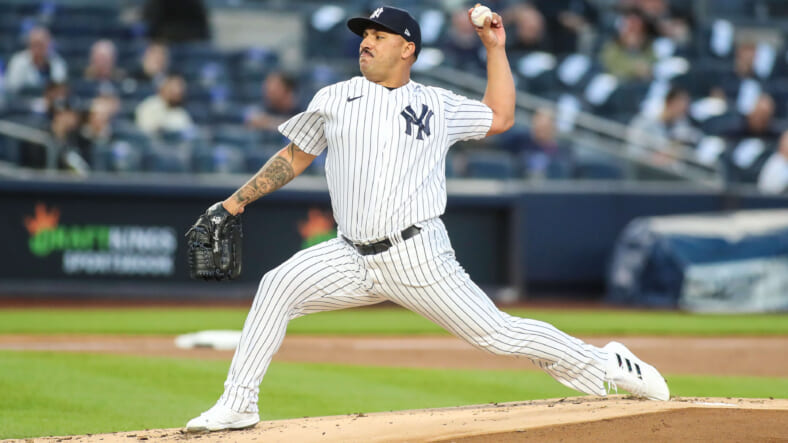 One of the biggest questions the New York Yankees need to answer ahead of Game 1 of the ALDS is who their starting pitcher will be in the playoff rotation.

There are strong arguments for both Gerrit Cole and Nestor Cortés based on past production and current momentum. However, it will certainly be a difficult choice for pitching coach Matt Blake. It may ultimately boil down to matchups and if a righty or lefty starter would be more beneficial to the team’s chance at winning.

Should Gerrit Cole or Nestor Cortés start Game 1 of the ALDS for the Yankees?

Typically, you’d expect Cole to be adamant about starting Game 1 as the team’s ace, but he indicated his desire to win no matter the cost, playing back into the team mentality. Considering how well Nestor Cortés has performed this year, it is no surprise that Cole is tipping his cap despite just breaking Ron Guidry’s single-season Yankee strikeout record with 249 strikeouts.

“I just want to win,” Cole said. “We haven’t talked about it, but I’m not assuming anything. I’m not here to be the ‘Game 1 guy’ and be worried about that. I’m just here to do my job. Whatever they ask me to do.”

The primary argument to start Cole is that he has plenty of playoff experience in his career. In fact, he features a 2.93 career ERA in the postseason with an 86.7% left on-base rate and 39.8% ground ball rate. His numbers clearly translate, if not better, than his regular season metrics.

However, most are still left stunned by his awful performance against the Boston Red Sox in the Wild Card last year. Cole lasted just two innings, earning a 13.50 ERA before handing the ball over to Luis Severino.

That tough outing is behind him, and he’s looking to put together a far more efficient performance this time around. Nonetheless, Cole has had an issue recently, giving up home runs. He’s allowed a homer in eight consecutive games, including 21 runs over his last 50.1 innings pitched. He features a 4.80 ERA in the month of September, struggling against some weak opponents like the Red Sox.

The argument for Gerrit Cole to start Game 1 is twofold — he has plenty of postseason experience, and he’s paid to perform as the team’s best pitcher. Regardless, things can change over time, and Cortés undoubtedly put himself in the conversation.

Cortés isn’t known for producing ground balls but rather weak contact and fly balls. He features a career-best 0.91 home runs per nine and an 8.2% HR/FB ratio. Changing his wind-up and pitch sequence this season has done him well, building momentum ever since returning from an injury list spell with a groin injury.

Cortés brings creativity and a dynamic style to the mound, something the Yankees have come to appreciate. He’s able to adjust on the fly and change his mechanics against individual batters to help keep them guessing.

In the month of September, Cortés featured a 1.80 ERA, giving up four earned runs over 20 innings. In his last regular season start against the Baltimore Orioles, he struck out 12 batters, allowing just one hit over 7.1 innings.

The main argument revolving around Nestor is the current momentum he has going into the playoffs. he doesn’t have excessive postseason experience or a massive contract to uphold, which may rub some people the wrong way regarding his reliability in the playoffs.

However, he looks the most comfortable and has the best string of games recently to justify starting him in Game 1. Ignoring Cole’s monster contract and success during elimination rounds in the past, if you square them up side-by-side and look at their current numbers, it is clear who should be the team’s ace heading into the playoffs, and that is Nestor Cortés.