Should the Yankees bring back under-the-radar bullpen arm Tommy Kahnle? 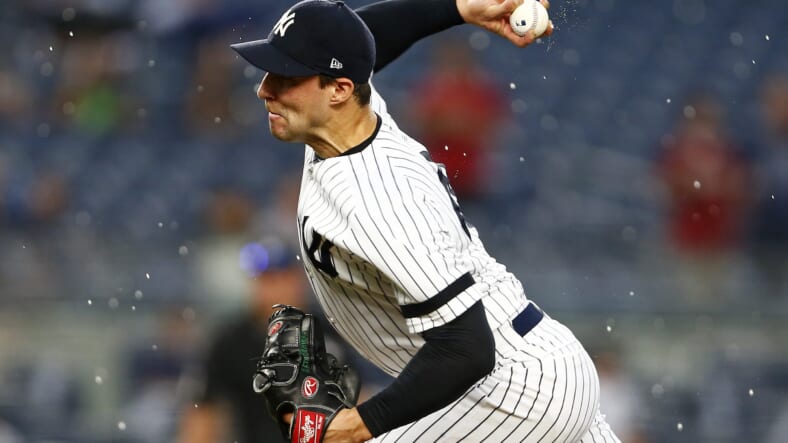 MLB Free Agency 2023 is officially official, as today, all players that weren’t under contract have become free agents. That means the likes of Judge, Rizzo, Benintendi, and various others are no longer Yankees. The way-too-early outlook for this roster sees a few vital points, especially if Judge really is the top priority like. I believe he is.

One of the biggest strengths is looking like the bullpen, and for one of the few times in recent years, the Yanks won’t be entering the season with an expensive bullpen. The likes of Marinaccio and Weissert emerged last year, meaning that that’s two less spots the FO has to fill. However, as we’ve all learned time and time again, depth is everything.

In a recent episode of Fireside Yankees, I was joined by Gabe (@PlayoffTanaka_), and he made point to mention the thought of Tommy Kahnle coming back to the Bronx. The Yankees acquired Kahnle in 2017 as part of the David Robertson return to NY special, with the Toddfather also coming to New York. That year, the Yankees saw off Rutherford, Ian Clarkin, and Tito Polo. As many remember, Kahnle was honestly the better of the two that season, and he would ultimately fill out an important spot in the bullpen for the future.

Kahnle’s two full years with the Yankees were polar opposites:

His 2018 season was atrocious by every definition of the word. He struggled to find any sort of consistency, was throwing his fastball slower than he had the year prior, and was throwing it way too often. Kahnle, as we all know now, is a heavy changeup pitcher that relies on soft contact and hitters guessing at what pitch he’s going to throw. If he were a professor, he’d teach ‘Dr.’ Mehmet Oz’s favorite course: Deception 101. In 2018 Kahnle hurled his fastball over the plate 54.4% of the time, and hitters would sit on it and absolutely clobber it. Opposition hitters’ bat .383 with a .660 SLG against that pitch in 2018, meaning that it was nothing more than a beachball every time it came over the plate. He threw his changeup 40.2% of the time, and much to the dismay of hitters, nobody could touch it (.158 SLG against).

Looking at the 2019 season, Kahnle was still throwing his fastball a good amount, but it was absolutely improved, and he would throw it less than the year before. That year he swapped the roles of his changeup and fastball and used the latter as a more secondary pitch. He upped his changeup usage to 51%, knocking his fastball % down to 42.6% — though hitters were still all over it. Kahnle saw his ERA and FIP fall in line with what he had expected and was used to, proving that the 2018 season was an anomaly. His 6.57 ERA and 4.44 FIP in 2018 (23.1 IP) plummeted to a 3.67 ERA & 3.33 FIP in 2019 (61.1 IP). Kahnle was hurling his changeup at an amazing rate, saw his Groundball % rise by 15% season-by-season, and seemed to be earning his keep on the squad. His changeup also saw a 49.0% whiff rate in ’19, to go with a staggering 50.8% strikeout %.

Kahnle’s next chapter with LAD — following a long recovery:

The next season, sadly, only three games in with NYY, Kahnle got injured and needed to undergo Tommy John Surgery. He would go on to obviously miss the entire season and missed 2021 as well, though he was under contract with the Los Angeles Dodgers during that period. Kahnle finally returned to baseball this season in September (though he did appear in a few games in May for LAD) following another injury and was taken off the 60-day injured list after he missed four months with a bone bruise in his right elbow.

Tommy Kahnle came back and looked like his old self, but an improved version, might I say. Though he only threw 12.2 innings in the regular season, that was good enough for me. He was flinging the changeup at a 76.4% usage clip, almost willingly abandoning his fastball (23.6%). The results were right in line with what he’s seen in the past, with his changeup buckling hitters left-and-right. Kahnle threw 133 changeups in 2022 and hitters’ hit .093 against it. To sell the pitch even more — a la “sell me this pen,” hitters slugged a whopping .093 against.

Risk vs Reward is all in favor of the upside of Tommy Kahnle:

Kahnle didn’t allow a single extrabasehit off his changeup, and it looks like 2023, Kahnle could look to sign a small deal and prove he’s still got the stuff to be elite in this league. Sure, he’s 33, but the risk vs reward chart is leaning entirely on the reward side of things. He wouldn’t cost much, and having both he and Ron Marinaccio’s changeups in the bullpen, could lead to one of the most lethal combinations in baseball. Kahnle posted a 12.91 K/9 his last season with the Yanks and walked a mere 2.93 BB/9 as well. In his 2022 showing with LAD, he struck out less at 9.95 per but saw the BB/9 dip down to 2.13.

Tommy Kahnle returning to NY seems almost too good to be true, and the reward for taking a very small risk in signing him could pay off tenfold.