Should the New York Yankees try to acquire Trevor Story? 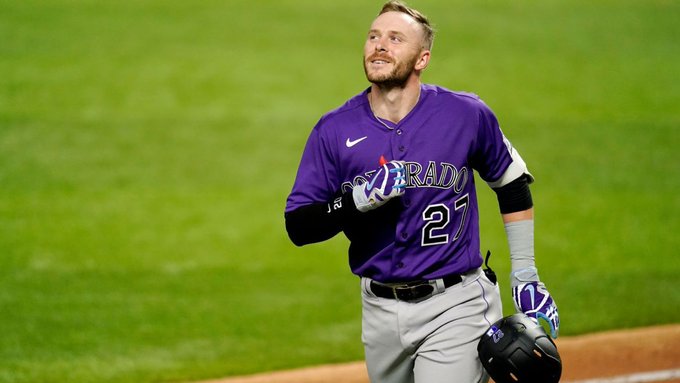 The New York Yankees picked up a massive win last night that snapped a four-game losing streak. The bombers defeated the Rays in extras when Clint Frazier walked it off with a two-run bomb to give them a 5-3 victory.

The win last night had to be a confidence boost for the Yankees who had been playing God awful. If you think of any aspect of baseball since the final week of May, the Yankees have been awful at it. Well, maybe not pitching in a couple of games.

The one area the Yankees have struggled in the most is the fundamentals. Defense, base running, making contact to move runners and manufacture runs. Maybe I’m in the minority, but it almost doesn’t feel real that the Yankees are sitting at 30-25 in third place. It feels so much worse than that.

Arguably the most disappointing player has been Gleyber Torres. The Yankees shortstop has struggled with the bat and the glove this year. Now, his glove has improved by the numbers from last season, but that’s not saying much.

Last week, Torres had a game where he had two errors in a single inning. His power at the plate has completely disappeared over the last season as he now just has five home runs in his last 88 regular season games. Between 2018 and 2019, Torres averaged 20.4 home runs over the course of 88 games.

Now, Gleyber Torres is still young with a ton of promise. The Yankees shortstop doesn’t turn 25 until December, but it still appears clear to me that Torres is not a long-term solution at shortstop. He just doesn’t seem comfortable there and it translates to the rest of his game.

Should the Yankees call the Rockies?

With Torres’ continued struggles, many have speculated whether or not the Yankees should pursue another shortstop. There just so happens to be an all-star shortstop who will be available to acquire at this year’s deadline.

That shortstop is Trevor Story. Now, Story hasn’t had a fantastic year himself and he’s recently been on the IL win an elbow injury, but despite those two things, he’s still considered to be one of the best shortstops in the game.

The Yankees have been linked to him in the past and those talks could turn up again. I love Gleyber Torres, but I don’t think anyone would argue the fact that Trevor Story would be an upgrade at shortstop.

Story is a free agent at the end of the year. There’s no guarantee that the Yankees would resign him if they go out and acquire him. Would that scare them away from a potential deal? Well, it’s certainly a hurdle.

Another thing standing in the way would be the asking price. Considering the current state of the infield, the Yankees might have to offer Gleyber Torres to get the deal done. Jeff Passan alluded to this on ESPN recently.Â

Would Brian Cashman give up on Gleyber Torres to acquire Trevor Story? I personally think he wouldn’t, but maybe he should. The next month will tell us a lot, but if Torres continues to struggle in the field and with power, don’t be shocked to see Story linked to the bombers more and more.