Report: Yankees are in hot pursuit of Juan Soto, the hype is real 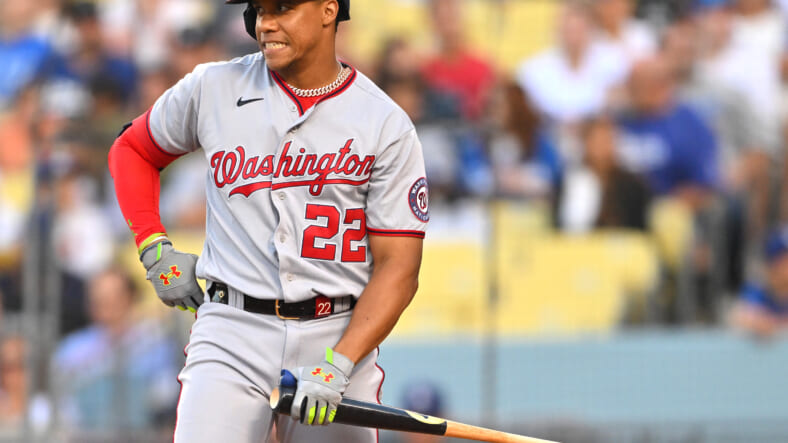 Soto is having another phenomenal season, hitting .245 with a 40% on-base rate, .485 slugging percentage, 20 homers, and 45 RBIs. He has a 20% walk rate and 14.2% strikeout rate. By most accounts, he was created in a lab to be a New York Yankee, which is why Cashman is preparing a monster offer.

Per Jeff Passan of ESPN, the Yankees’ interest in Juan Soto is very real:

“I don’t think the Dodgers are in quite the same, as certainly the Padres, Cardinals and Yankees.”

“Santa Claus, I hate to say it, isn’t real. But the Yankees in this situation [Soto] are.”

The Yankees still need starting pitching support, another bullpen arm, and a quality outfielder, but they will be sacrificing any other moves by landing Soto in a behemoth package.

Theoretically, the Yankees could acquire Luis Castillo from the Cincinnati Reds, a bullpen arm like Miami Marlins’ Anthony Bass, and an outfielder like Kansas City Royals’ Andrew Benintendi for far less than Soto would cost alone.

Soto is a generational player at 23 years old that won’t be a free agent until 2025. That means the Yankees can pay Aaron Judge, unload some big contracts in the coming years, and have enough to extend Soto. However, the rest of the team may be lacking in some areas, especially after giving up the entire farm system for a singular player.

It is interesting to see how real Cashman’s pursuit of Soto is, especially with other needs on the team. Is he enough to propel the Yankees to a World Series appearance? That is a question that won’t be answered until October, but we will undoubtedly get an idea of how willing Cashman is toward the team’s desire to improve in just a few days at the trade deadline.