Projecting the Yankees starting outfield for the playoffs 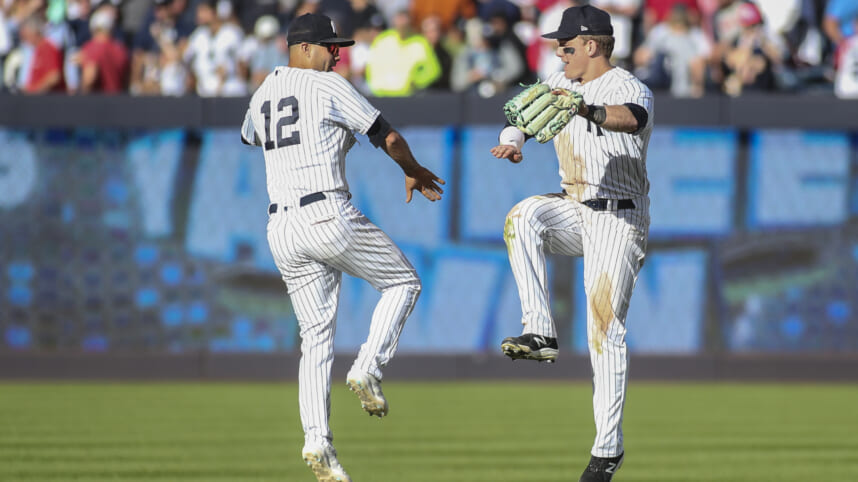 The New York Yankees are less than two weeks away from participating in the 2022 playoffs. They finally locked down the No. 1 seed in the AL East after defeating the Toronto Blue Jays on Tuesday night, celebrating on the back of a Jameson Taillon gem.

However, there are a few questions left to answer before the playoffs eventually begin, notably what the starting outfield would look like.

Projecting the Yankees’ starting outfield for the playoffs:

Obviously, Aaron Judge will feature in right field for the Yankees, a superstar in the midst of a historic season. Judge remains just one homer shy of Roger Maris’s single-season record.

When Yankees GM Brian Cashman acquired Harrison Bader from the St. Louis Cardinals, they always had their eyes set on the playoffs. Bader is one of the best defensive centerfielders in the game and has already produced a spark for the Yankees.

Across eight games, Bader hosts a .227 average with a 28% on-base rate — he’s been a net positive for the most part, recording six RBIs and a stolen base.

Defensively, Bader has a perfect fielding percentage and has already earned one defensive run saved above average with the Yankees. He featured 15 defensive runs saved last season for the Cardinals, so his defense alone is reason enough to start him in center.

If not for Andrew Benintendi going down, the Yankees might have never seen Oswaldo Cabrera on an everyday basis. Cabrera stepped things up significantly on the offensive side, hitting .247 with a 32.2% on-base rate in the month of September. However, over his last seven games, Cabrera has earned a .333 average with a 38.5% on-base rate.

Defensively, Cabrera has been electric in the outfield, earning one defensive run saved above average. He is far better in right, but he can hold things down in left field for the playoffs.