Projecting the Yankees’ starting infield for the 2023 season 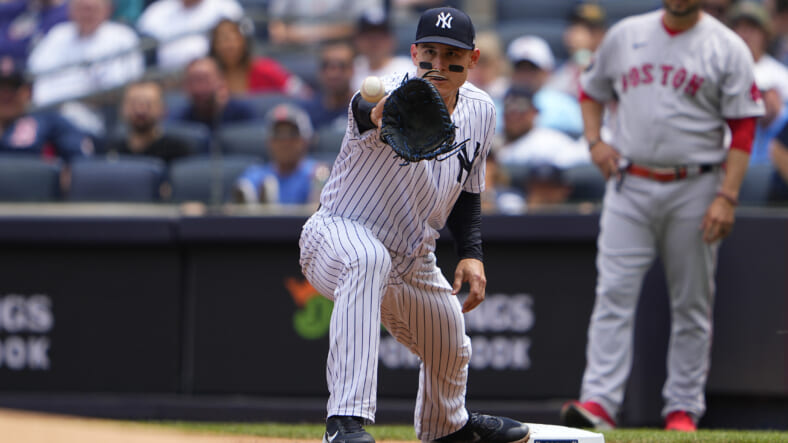 The New York Yankees have several big decisions to make this off-season, especially with a number of players either hitting free agency or heading to arbitration. Inconsistent performances may force general manager Brian Cashman to make some lofty changes, notably at shortstop and second base.

It is clear the Bombers can’t continue down the same path with specific players, given their inconsistencies during the postseason. The Yankees simply need better hitters in clutch situations, which is an attainable goal if they’re willing to go through a bit of turnover this off-season.

One of the Yankees’ top postseason performers was first baseman, Anthony Rizzo. He hit .276 with a 43% on-base rate, including two homers and eight RBIs during the playoffs. He signed a two-year, $32-million deal before the season began, but he’s expected to opt out of his contract and ask for more money in free agency.

It is possible that the Yankees retain Rizzo on a similar deal but increase his yearly earnings to around $18 million. At the end of the day, Rizzo is 33 years old and isn’t going to garner a long-term contract, so the Yankes will definitely try to keep his years down.

The Yankees have DJ LeMahieu under contract until 2027, but the 34-year-old suffered a toe injury that severely limited his contributions late in the season.

In fact, DJ was unable to perform during the playoffs, playing in 125 games during the regular season. He hit .261 with a 35.7% on-base rate, including 12 homers and 46 RBIs. LeMahieu is known as a reliable postseason hitter, averaging .272 with a 34% on-base rate, three homers, and 11 RBIs across 21 games. They severely missed his offensive capabilities, but he should be 100% healthy for next season and he could slide in as the starting second baseman with Oswaldo Cabrera featuring as the primary utility man.

In this scenario, Gleyber Torres is traded to help off-load some of Josh Donaldson’s monster contract. The Yankees get a back-end starting pitcher in return.

It is time the Yankees commit to their young shortstop in Oswald Peraza. Peraza looked fantastic over an 18-game sample size, hitting .306 with a 40.4% on-base rate over 18 games. He failed to record a hit in the playoffs, but he wasn’t ready to enjoy disciplined at-bats in high-leverage situations. However, he flashed elite defensive qualities — something the Yankees need at SS.

Similar to how the Houston Astros committed to rookie Jeremy Peña this year, Aaron Boone should give Peraza that same opportunity. The team may end up calling Anthony Volpe to the majors at some point in 2023, but that only gives them more flexibility with how they use their young infielders.

At some point, Cashman will have to lean on his pride just a bit. He made a wild trade to acquire Josh Donaldson and Isiah Kiner-Falefa to play two of the more important infield positions.

Donaldson showed solid defensive metrics but struggled offensively, but he’s expected to be offloaded along with his $25 million for the 2023 season. IKF was inconsistent at shortstop but won a Gold Glove on the hot corner earlier in his career, so the Yankees could retain him and utilize him in that fashion while Volpe s still developing. Ideally, Volpe will take over shortstop and Peraza could kick out to third base so IKF can feature as a primary utility man next season.