Overlooked prospects on the Yankees that you should start to know 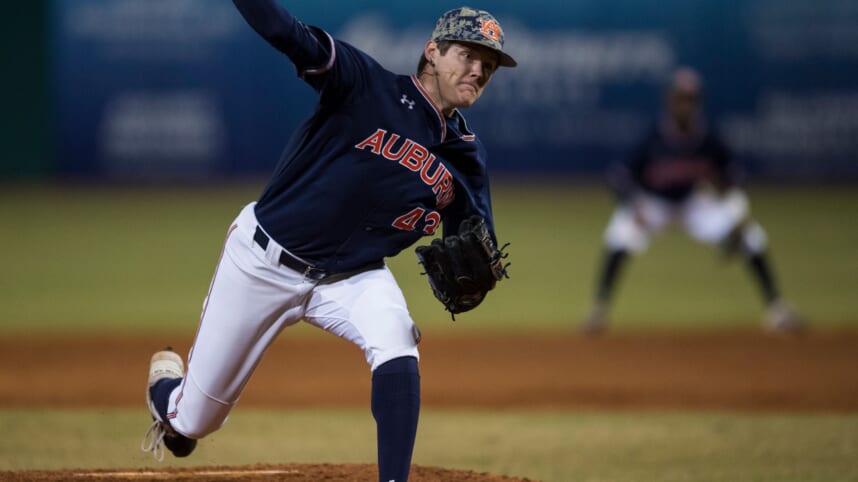 The Yankees have a lot of prospects who fly under the radar and get overlooked for a variety of reasons. Perhaps they were clocked in at a lower velocity when initially drafted, or they play a position that is valued less for prospects, or perhaps they broke out after midseason updates and missed out on being ranked.

For whatever reason, these three MiLB prospects are not ranked on MLB Pipeline’s Top 30 Yankee prospects, but they are players we should still keep our eyes on. I will leave Andres Chaparro off of this list only because I’ve already written about him, and I go far more in-depth in that piece. With that said, let’s take a dive into these high-upside guys who have been overlooked.

The Yankees’ 6th round pick in 2022, Richard Fitts, put together a season where he posted a 3.70 ERA and 3.54 FIP across Single-A and High-A. His ERA was over 5.00 with the Tampa Tarpons in Single-A, however, his strikeouts and walks showed there was positive regression due. This reflects in his Expected Fielding Independent Pitching (xFIP) at 3.34 with Tampa, but after a call up to High-A with Hudson Valley, he tore it up.

We can see in this dominant outing a healthy dose of those backspinning fastballs up in the zone, sharp sliders with good drop and solid sweep, and a changeup that can put left-handed batters away. At just 22 years old, he’ll start his age 23 season next year with a chance to blow past High-A and get a crack at dominating at the Double-A level. His velocity leaves something to be desired, as he sits at 92.6 MPH but has hit 97 MPH in college and 95.8 MPH with the Tampa Tarpons. With more consistent velocity and higher outputs, we could see better fastball results, but more importantly, his slider could become even better.

I’ve discussed how Clay Holmes has gone with a gyro and sweeping slider, and in that article, we looked at pitch selection trends and the reliance on sliders trending up while fastballs trend down. I imagine as he climbs through the minors, you’ll see him use his slider more and his fastball less, and that slider gaining velocity makes it harder to hit that pitch. According to Chris Langin of Driveline Baseball in his video discussing sliders, it’s discussed towards the end that for every +1 MPH gained on your fastball, roughly +0.75 MPH are added to your breaking pitches. He’s got the potential to slot in at the backend of the Yankee rotation in 2024 or 2025, and more eyes should be kept on the former Auburn RHP.

Hidden in the really low-levels of the minors is a switch-hitting middle infielder with crazy swing decisions. Walking more than you strikeout is extremely impressive, but having over double the walk rate of your strikeout rate is simply unheard of. Keiner Delgado’s professional debut this season was incredible, posting this ridiculous statline in 52 games:

He’s just 18 years old, and Dominican Summer League success is volatile, so there are obvious reasons he may have been left off, but that does not mean he shouldn’t get the respect he deserves. He profiles really well since he never chases, never whiffs, and also has displayed good power. I’d argue Delgado is the best prospect on this list, showing unbelievable upside and great plate discipline at such a young age. He’ll be a lower-end top 100 prospect within the next year or so, and while being just a DSL prospect is why he doesn’t get much recognition, it doesn’t make him underrated.

At 5’8, 145 pounds, hopefully, he fills out his frame a little more and can start to tear it up in the Complex and Low-A levels in 2023, so we can start to see more from the young Dominican infielder as he continues his journey to the big leagues.

Taller than Aaron Judge, the 6’8 adonis of a man known as Jack Neely has tore up the lower level of the minors in his first full season of professional ball. Drafted in the 11th round of the 2021 Draft (the Richard Fitts draft!), Neely came from Ohio State, where he struggled mightily (6.10 ERA), splitting time in the rotation and bullpen. His run prevention issues stemmed from a high WHIP (1.427) and high HR/9 (2.0), but these issues corrected themselves at Single-A and High-A since 2021.

The walks are still high (11.6%), but when you strike out over 40% of batters faced, that’s not an issue. The HR/9 rate is minuscule, and his mid-90s fastball has a ton of ride and run while his slider sweeps a lot. He’ll also throw some curveballs, but that seems to be a distant third pitch. His stuff is up-and-coming, though the immediate improvement he could make is getting a pitch with a substantial amount of depth or perhaps a lot of run that plays off of his fastball against LHP, but that could come together as he has more outings with Hudson Valley and reaches Double-A.

Neely is a strong candidate to be a fast riser as a reliever because their viability depends on their stuff, and as long as Neely’s stuff remains above average and his results remain strong, he’ll be a valued member of the 40-man roster in a year or two.

2023 serves as a huge year for all three of these prospects. The beauty of evaluating prospects is just how volatile their outcomes can be, with guys burning out in MiLB or becoming stars. For this crop of young talent, I hope they get their time in the spotlight to display their talents because so far, they’ve done a lot of their work under the radar.